Which Downton Abbey character do you resemble?

The Downton Abbey personality test is an unscientific test for entertainment purposes, earning popularity through the continued success of the franchise.

This assessment will determine which of seven women Downton characters you most closely resemble.

I can be naive and unassuming.

The Test includes the following characters:

“Women like me don’t have a life… We’re stuck in a waiting room until we marry. My life makes me angry.”

The eldest daughter of a wealthy aristocratic family the Crawleys, Mary is elegant, stoic, and aloof. She can be disdainful or even mocking, never failing to speak her mind. She struggles to form emotional attachments with others despite being fiercely loyal and prideful about her family. Mary has gotten herself into complicated romantic situations on more than one occasion, as her beauty and social status attract frequent suitors and admirers. Though born into a life of luxury, Mary’s rebellious, ambitious nature leads her to seek out greater opportunities for herself. She is something of a revolutionary regarding women’s position in society in the early 20th century, proving time and again that she is a force to be reckoned with.

“I know now I need a purpose.”

Middle child of Lord and Lady Grantham, Edith struggled for years in the shadow of her older sister. She is kind, compassionate, and cares deeply for her family, despite the limitations she felt her relatives placed on her. Edith struggled with envy as she missed out on opportunities given to her sister time and again. Introverted and reserved, Edith did not always have a clear sense of direction in her life. Those around her did not expect her to succeed, but Edith had a quiet determination; a flame within her to make a name for herself. She finds her way over time, flourishing away from her family’s watchful eye and eventually becoming a successful magazine publisher. Edith thrives under conditions of hard work, challenging deadlines, and the intrinsic reward of a job well done.

Dignified and traditional, Violet is Dowager Countess of Grantham and matriarch of the Crawleys, never hesitating to remind her family members of this fact. She also holds the title of president of the Downton Hospital, which she uses as a source of power and control. Though she may not technically be in charge of Downton, Violet can often be found running the show behind the scenes. Violet is proud, intelligent, and frequently sought after for her wisdom and advice. Well-organized and practical to a fault, Violet expects things to be done in a certain way and won’t stand for any foolishness or impropriety. There is a right and a wrong way to conduct oneself, and Violet is the first to lead by example in this aspect.

“If I am to live in this village, I must have an occupation. Please, let me be useful.”

Widowed and unemployed, Isobel followed her son Matthew to Downton when he was named heir to the estate. Thrust into an aristocratic world different from her own, Isobel worked quickly to find a place for herself at the local hospital, as she was trained as a nurse. Eager to contribute, she thrives when she has a job to do and is at her best while helping others. Isobel is empathetic, compassionate, and cares for people. She champions those less fortunate and fights for those unable to stand up for themselves. Isobel respects tradition but is not afraid to move past it when an innovative and improved way of doing something presents itself.

Kitchen maid turned cook, sweet-natured Daisy had a difficult upbringing as a member of the lowest of the low among the working class. She is organized and efficient, thrust into a world of long hours and difficult work from a young age. She can sometimes ask a lot of questions, but it is usually done in an attempt to better understand and perform her job. Daisy has a strong sense of loyalty and duty, preferring her routine structure over any attempts to greatly change her position. She has a playful side and can be prone to gullibility and schoolgirl crushes. Though she is of a sensitive disposition and prone to emotion, Daisy does her best to keep her emotions private and under control.

“Good men…they’re not like buses. There won’t be another one round in ten minutes.”

Lady’s maid to the Crawley women, Anna is a sweet, sociable, and warm person. She easily connects with others and makes them feel comfortable and cared for. She quickly recognized similar traits of kindness and dependability in the man who would later become her husband, Mr. Bates. Anna is typically free with her emotions and opinions while at the same time being quite alert to what others think of her. Despite her high moral standards, Anna will not hesitate to compromise her own beliefs and comfort in order to help those closest to her. Overall, Anna is tough and practical, handling the challenges life throws at her with grace.

“We must all have our hearts broken once or twice before we’re done.”

Head housekeeper and in charge of all the female servants, Mrs. Hughes keeps Downton Abbey running smoothly with her patient, even-tempered hand. She enjoys her job and does it well but is not immune to occasional fantasies of a different sort of life. Though she appears a strict taskmaster at first glance, Mrs. Hughes is truly kind-hearted and generous and often sought out for her advice and assistance. She is fiercely protective of the younger staff and is always ready with words of encouragement (or criticism). She does not shy away from problems, facing them directly with grace and compassion. Others easily recognize her contributions and can hardly imagine Downton without Mrs. Hughes.

As the developers and publishers of this Downton Abbey Character Test, we have strived to make sure the quiz is as complete and accurate as possible by subjecting it to statistical controls and validation. Before taking our free online assessment, please remember that the test is provided “as-is” for entertainment purposes and should not be misconstrued as providing professional advice or recommendations of any kind. If you would like additional information about the present test or any of our other online tests, please refer to our Terms of Service. 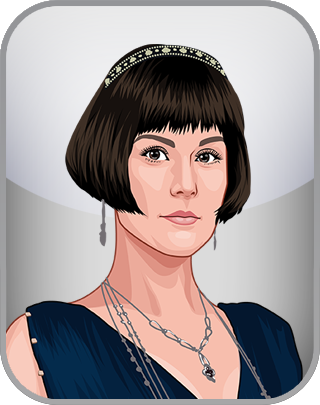 1. Free. This Downton Abbey Test is available to you free of charge and will allow you to obtain your score related to the personality profiles of seven characters from the popular franchise.