Which Dune character do you resemble?

The Dune Personality Test is an unscientific test designed for entertainment purposes and earning popularity through the continued success of the franchise.

This assessment will determine which of seven Dune characters you most closely resemble.

The IDRlabs Dune Character Test (IDR-DCT©) was developed by, and is the exclusive property of, IDRlabs International. The IDR-DCT utilizes characters from the Dune franchise but is not in any way associated with Legendary Pictures, Warner Bros. Pictures, author Frank Herbert, or any other professionals or professional bodies affiliated with the Dune books or films.

The test provides feedback such as the following: Paul Atreides: Quiet and thoughtful, Paul is the son of Duke Leto, ruler of House Atreides on the watery planet Caladan. As heir to this powerful throne, Paul spent his youth in constant training that prepared him for his destiny. He received a comprehensive education, including close combat fighting, royal customs, and the history of the Galactic Padishah Empire. But at night he dreamt of the exotic deserts of the planet Arrakis – also known as Dune – and of a mysterious blue-eyed Fremen girl awaiting him there. Though close to his father, Paul spent many hours under the careful tutelage of his mother, who possessed the witch-like powers of her Bene Gesserit Sisterhood. The sisterhood came to believe Paul may be their prophesied chosen one — a super-being they had worked for generations to create. When exposed to the conscious-altering spice of Dune, Paul begins to finally tap into the hidden potential of his true abilities, alerting the Fremen to the possibility that he might be Muad’Dib, their future savior.

Duke Leto Atreides: The noble ruler of the mighty House Atreides on the planet Caladan, Duke Leto is still subject to the capricious whims of the Galactic Padishah Emperor. When Leto is forced to take stewardship over the desert planet Arrakis, the honor-bound duke stoically agrees to his royal duty and moves his family to the inhospitable new world. There he seeks to make peace with the local Fremen, a tribe oppressed by their previous masters, the cruel House Harkonnen. Wise and politically savvy, Leto is keenly aware he must work extra hard to gain the Fremens’ trust as he takes over dangerous spice mining operations while simultaneously preparing for open hostilities with the disgruntled Harkonnens. Surrounded by treachery, he’s smart enough to realize he’s probably been set up to fail, yet he presses forward with caution and a strong sense of duty. Leto also ensures that his mild-mannered son Paul receives ample training to prepare for his own ascendancy, which may come sooner than desired.

Baron Vladimir Harkonnen: Brilliant and devious, Vladimir Harkonnen is the ruthless baron of House Harkonnen, the former stewards of Arrakis. After many years of mining invaluable spice from the desert planet, Harkonnen is incredibly wealthy and equally cruel. When the Emperor demands he turn over mining operations to his archrivals, the House Atreides, Harkonnen deceptively submits to the order. However, back on his homeworld of Giedi Prime, he plots a victorious return to usurp the newly-installed stewards of Dune and reestablish his oppressive regime. With his savage nephew “Beast” Rabban, Harkonnen acts quickly and stealthily to recruit a vicious army of Sardaukar mercenaries to retake control of the spice planet. With an ego to match his massive bulk, Harkonnen sometimes underestimates the resourcefulness of his enemies. Rightly suspicious of everyone, the Baron maintains a personal force shield around his body, along with gravity-defying suspensors to help him easily float away from dangerous situations. His servants, however, are not always so lucky.

As the developers and publishers of this Dune Character Test, we have striven to make sure the quiz is as complete and accurate as possible by subjecting it to statistical controls and validation. Before taking our free online assessment, please remember that the test is provided “as-is” for entertainment purposes and should not be misconstrued as providing professional advice or recommendations of any kind. If you would like additional information about the present test or any of our other online tests, please refer to our Terms of Service. 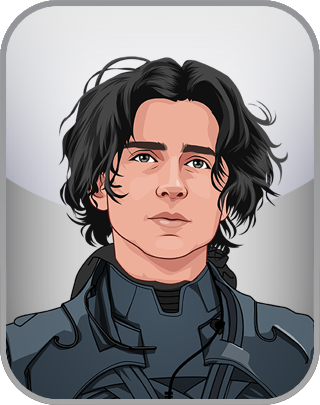 1. Free. This Dune Test is available to you free of charge and will allow you to obtain your score related to the personality profiles of seven characters from the popular franchise.