Which of the guys from Gilmore Girls should you end up with?

Gilmore Girls is a television series that centers around the relationship between a single mother, Lorelai, and her daughter, Rory. The series also features a diverse cast of male characters who play important roles in their lives.

Many women viewers find themselves fascinated by the personalities, motivations, and social styles of the male characters, which are all very different from each other. They each have their own unique qualities that make them appealing. The male characters are not perfect, however, and their flaws and vulnerabilities are often what make them so relatable and appealing.

Overall, the male characters in Gilmore Girls are complex, fascinating, and often frustrating, but that is precisely what makes them so appealing to many women viewers.

Now the question is: Which of the guys from Gilmore Girls should you end up with?

My ideal romantic partner should be...

The test features the following matches:

Dean Forester is introduced in the first season as a high school student who lives in the town of Stars Hollow. Dean is a charming and handsome young man with a strong work ethic. He has a close relationship with his parents and is fiercely loyal to his friends and family.

Despite his good looks and popularity, Dean struggles with insecurities and is often unsure of himself. He is initially portrayed as the stereotypical "good guy" who is in a stable and committed relationship with his high school sweetheart. However, as the series progresses, Dean's true nature is revealed to be more complex and nuanced.

Dean is a loving and devoted partner, but he also has a tendency to be possessive and controlling. He is protective of those he cares about but can sometimes be overly protective to the point of being suffocating. Dean is a multifaceted character who undergoes significant growth and development throughout the course of the series.

Jess is introduced in the second season as a troubled teenager who has been sent to live with his estranged uncle, Luke Danes, in Stars Hollow. Jess is a rebellious and brooding young man who initially clashes with the residents of the small town.

Despite his rebellious nature, Jess is shown to be highly intelligent and articulate. He is a voracious reader and has a talent for writing, although he struggles with expressing his emotions. Jess is initially portrayed as a loner who shuns the company of others, but as the series progresses, he begins to form close relationships with some of the town's residents, particularly Rory Gilmore.

Jess is a complex and intriguing character who undergoes significant growth and development throughout the course of the series. He is ultimately revealed to be a deeply caring and sensitive person who is capable of great love and loyalty. Despite his rough exterior, Jess has a tender heart and is always willing to stand up for those he cares about.

Logan Huntzberger is introduced in the fifth season as a wealthy and privileged young man who is a member of Yale's prestigious "Life and Death Brigade" secret society. Logan is Rory Gilmore's main love interest in the later seasons of the series.

Despite his privileged background and his initial reputation as a carefree playboy, Logan is shown to be a complex and multifaceted character. He is highly intelligent and articulate and has a talent for writing. Logan is also fiercely loyal to his friends and family and is willing to stand up for what he believes in.

Overall, Logan is a fascinating and complex character who undergoes significant growth and development throughout the course of the series. Despite his flaws, he is ultimately a caring and devoted partner who is capable of great love and loyalty.

Luke Danes is introduced in the first season as the owner of Luke's Diner, the local eatery in the town of Stars Hollow. Luke is a gruff and no-nonsense type of guy who values hard work and loyalty above all else.

Despite his tough exterior, Luke has a soft spot for Lorelai Gilmore and her family. He initially resists his growing feelings for Lorelai but ultimately falls in love with her and becomes a father figure to her daughter, Rory. Luke is fiercely protective of Lorelai and Rory and is always willing to go the extra mile to help them.

However, Luke also has his own issues and insecurities. He struggles with trust and commitment and often pushes Lorelai away when things get too serious between them. This causes a lot of conflict in their relationship, but ultimately they are able to work through their issues and become a stable and loving couple.

Overall, Luke is a complex and multifaceted character who is a central part of the Gilmore Girls universe. He is a gruff and stoic outsider who is able to form close connections with the residents of Stars Hollow and becomes a loving and devoted partner to Lorelai.

Christopher Hayden is introduced in the first season as Lorelai Gilmore's high school boyfriend and the father of her teenage daughter, Rory. Christopher is a wealthy and privileged young man who comes from an influential and powerful family.

Despite his privileged background, Christopher struggles with responsibility and commitment. He is initially portrayed as an immature and selfish person who is unable to fully commit to his relationship with Lorelai or his responsibilities as a father to Rory. However, as the series progresses, Christopher undergoes significant personal growth and becomes a more mature and responsible person.

Christopher's relationship with Lorelai is tumultuous and fraught with conflict. They have a history together and share a deep connection, but their differing priorities and life choices often cause problems between them. Christopher ultimately marries another woman, but he remains a part of Rory's life and continues to support her in various ways.

Overall, Christopher is a complex and nuanced character who undergoes significant growth and development throughout the course of the series. Despite his flaws, he is ultimately a loving and devoted father to Rory and a supportive presence in her life.

Max Medina is introduced in the first season as a teacher at Chilton Preparatory School, where Rory Gilmore is a student. Max is a kind and intelligent man who is passionate about teaching and literature.

Despite his gentle and thoughtful nature, Max struggles with insecurities and self-doubt. He is initially portrayed as a bit of an awkward and reserved person, but as the series progresses, he becomes more confident and assertive. Max has a close relationship with his students and particularly forms a bond with Rory.

Max's relationship with Lorelai Gilmore is a major part of the series. They clash at times due to their differing personalities and priorities, but ultimately form a relationship and become engaged. However, their relationship is fraught with conflict and ends in a painful breakup.

Overall, Max is a complex and many-sided character who is an important part of the Gilmore Girls universe. He is a kind and devoted teacher who is capable of great love and loyalty but also struggles with his own insecurities and emotional baggage.

Dave Rygalski is introduced in the second season as a high school student who is a member of the local band Hep Alien. Dave is a talented musician who is smart and articulate and has a dry and sarcastic sense of humor.

Despite his intelligence and talent, Dave struggles with self-confidence and insecurities. He is initially portrayed as a shy and reserved person who is content to be in the background, but as the series progresses, he becomes more confident and assertive. Dave forms a close friendship with Lane Kim, the drummer of Hep Alien, and they eventually become a couple.

Dave's relationship with Lane is a favorite of the series, and they are shown to be a stable and supportive couple who have a deep connection. Dave is always there for Lane and is willing to support her in whatever she does, even if it means making sacrifices for her.

Overall, Dave is a complex and multifaceted character. He is a talented musician and a loyal and supportive partner but also struggles with his own insecurities and self-doubt.

As the publishers of this Gilmore Guys Romantic Match Test, which allows you to screen yourself for whom you would fit the best romantically, we have strived to make the test as reliable and valid as possible by subjecting this test to statistical controls and validation. However, free online quizzes such as the present Gilmore Guys Romantic Match Test do not provide professional assessments or recommendations of any kind; the test is provided entirely “as-is.” For more information about any of our online tests and quizzes, please consult our Terms of Service. 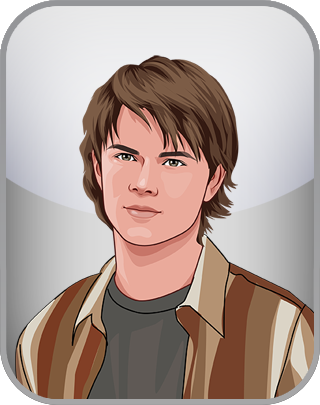 1. Free. This Gilmore Guys Romantic Match Test is available to you at no charge and will allow you to obtain your scores related to the personality profiles of six characters from the popular franchise.

2. Based on real psychometric items. Unlike other Gilmore Girls and Guys Character Tests and quizzes that are readily available online, the present test was constructed using genuine psychometric items and was influenced by classic personality theories.