The Inglorious Basterds Test is an unscientific and “just for fun” personality assessment that will determine which of seven characters from the film you most closely resemble.

Who is your “Inglourious Basterds” personality match? For each of the following statements, indicate your level of agreement below.

I can be really nasty when I take my revenge.

The IDRlabs Inglourious Basterds Character Test (IDR-IBCT©) is the property of IDRlabs International. The IDR-IBCT utilizes characters from the Quentin Tarantino film but is not in any way associated with Quentin Tarantino or Universal Pictures. No infringement is intended by the present test.

In determining which character from “Inglourious Basterds” you resemble the most, the test provides feedback such as the following:

Hans Landa: A seemingly mild-mannered military detective, Colonel Hans “The Jew Hunter” Landa is one of Nazi Germany’s most ruthlessly effective killers. Though he claims only to be doing his job, the depraved Landa loves toying with his victims, pretending to be charming while fully aware his reputation is terrorizing them. A skilled linguist and cunning manipulator, Landa takes pride in being the best at his trade, often boasting of his investigative skills. He relishes his SS orders to track down every Jew hiding in occupied France, claiming that, unlike other German troops, he can think like his victims. The devious yet decorated officer ultimately reveals he has no loyalty to his masters and serves only himself. Upon realizing he can end the war by simply not interfering with the Basterds’ plan to assassinate the Third Reich leadership, Landa readily flips sides and proposes to surrender in exchange for full immunity for his war crimes.

Aldo Raine: A direct descendent of the mountain man Jim Bridger, Aldo Raine gave up his backwoods moonshining career to join the Army and help the Allies defeat Germany. Known for his Tennessee drawl and the vicious scar running across his throat, 1st Lieutenant Raine soon became the no-nonsense leader of “The Basterds,” a band of Jewish-American soldiers recruited to hunt and terrorize Nazis. Drawing his brutal nickname “Aldo the Apache” from his group’s penchant for scalping captured enemy soldiers, Raine takes special pleasure in tormenting his prey to build The Basterds’ fearsome reputation. Hitler himself begins to take notice after Raine carves a swastika into the survivors’ heads, leaving select German troops alive to send the Fuhrer a message. Despite his psychopathic nonchalance toward violence, Raine is a compassionate patriot who cares for his men and their welfare. His engaging personality and dark sense of humor make Aldo the Apache the perfect wartime leader for a rogue team of commandos operating behind enemy lines.

Bridget von Hammersmark: After finding international fame as a successful film actress, the lovely German-born Bridget von Hammersmark secretly volunteered her services to U.S. and British intelligence agencies in order to help defeat the Nazis she so hated. Working as an undercover agent for nearly two years, Hammersmark was highly adept at using her affected charm, celebrity status, and physical allure to sway and disarm people in almost any situation. Hammersmark not only helped devise Operation Kino, the Allied plan to assassinate Third Reich leadership at a film premiere in Paris, but she also played a crucial role in carrying out the plot. Injured during a bloody shootout just prior to the mission, the actress-spy survived only to run afoul of Colonel Landa, who was impervious to her attempts to brush off his interrogative questions.

The authors of this free online Inglourious Basterds character quiz are certified in the use of various personality tests and have worked professionally with psychology and personality typology. Before using our online test, please remember that the results are provided “as-is” and should not be understood as the equivalent of a professional assessment or recommendation of any kind. For more on our free online Inglourious Basterds Test, please refer to our Terms of Service. 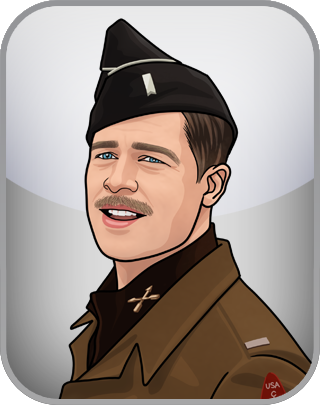 1. Free. This online Inglourious Basterds test is provided to you free of charge and will allow you to obtain your scores as related to seven major characters from the film.

4. Developed by professionals. The current Inglourious Basterds Test was created by researchers and psychology professionals who work with psychometrics.