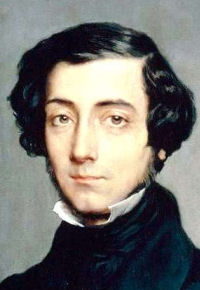 Quotes by and about Alexis de Tocqueville

Tocqueville: "Muhammad ... put into the Koran not only religious doctrines, but political maxims, criminal and civil laws, and scientific theories. ... That alone ... is enough to show that Islam will not be able to hold its power long in ages of enlightenment and democracy."