Quotes by and about Catherine the Great

Catherine: "Speak with moderation and not too loudly, that those present not have an earache or headache. ... Do not bore or fatigue anyone."

Catherine: "Others should join in any innocent fun that someone thinks up."

[On her childhood:]
Catherine: "I was horribly curious, quite stubborn, and most ingratiating. ... I was extremely fickle. I never liked dolls. ... There was no boy more daring than I. ... I was quite secretive."

Catherine: "My mother's ill humor was easily pacified by [being given] things that pleased her, and as she was often angry and especially with me, I did not fail to use this method once I had discovered it."

Catherine: "My mother became angry with Prince Golitsyn, as he was traveling with Count Chernyshev, who had committed I know not what treachery. She claimed he was a dangerous man whom we should avoid and who fabricated stories at will. She gave both the cold shoulder, but since this rejection caused us deadly boredom, and since we had no choice as they were more educated and better conversationalists than the others, I did not participate in this sulking, which brought me several angry reproaches from my mother." 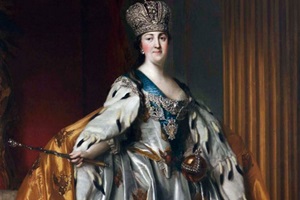 Catherine [to Denis Diderot:] You forget the difference between our two positions: you work only on paper, which ... is smooth, supple, and offers no resistance to either your imagination or your pen; whereas I, a poor Empress, work on human skin, which is much more irritable and ticklish."

Catherine: "When I have promised myself something I cannot recall ever having failed to do it."

[On her early relations with the Grand Duke who later became her husband:]
Catherine: "The Grand Duke was naturally as discreet as a cannon blast, and when he had a heavy heart and something on his mind, he could not wait to recount it to those with whom he was accustomed to speak, without considering to whom he spoke. ... He always innocently believed that everyone was of his opinion and that there was nothing more natural. ... I resolved to show great consideration for the Grand Duke's confidence so that he would at least view me as someone he could trust, to whom he could say everything without any consequences. I succeeded in this for a long time."

Catherine: "[Growing up] I treated everyone as best I could and made it my task to earn the friendship or at least to lessen the enmity of those whom I suspected of being evilly disposed toward me. I showed no preference for any side, did not meddle in anything, always had a serene air, much kindness, attentiveness, and politeness for everyone, and because I was naturally quite cheerful, I saw with pleasure that from day to day I gained the affections of the public, who regarded me as an interesting child who was not without intelligence."

Catherine: "I wanted more than ever to gain the affection of everyone in general, great and small. No one was neglected by me, and I made it a rule to believe that I needed everyone and as a result to act in such a way as to win their goodwill, in which I succeeded."

Catherine: "I am as philosophical as possible. No passion makes me act."

Catherine: "My disposition was naturally so accommodating that no one was ever with me a quarter of an hour without falling comfortably into conversation, chatting with me as if they had known me for a long time."

Catherine: "One day [one of my ladies-in-waiting] noticed my tears and asked me about them; I gave her the best reasons I could, without telling her the true ones."

Catherine: "I can adapt myself to all people. I am like Alcibiades in Sparta and in Athens."

Catherine: "Writers today are incapable of the ancients' tact."

Markus Cruse: "As Empress, Catherine wrote and read every day, adapting her ideas, which she acquired through reading classical, French, German and English political philosophy, to what was possible in Russia."

Markus Cruse: "Catherine [led] an unorthodox personal life [and had] a passion for ideas."

Markus Cruse: "Intelligent, well-read, energetic, and ambitious, Catherine, like Peter, applied herself to all aspects of Russian politics, society, history, and culture."

Markus Cruse: "[She contacted] Voltaire to initiate a literary, political, and philosophical correspondence of mutual flattery and usefulness that lasted until his death."

Markus Cruse: "Throughout her reign, she corresponded constantly with statesmen and women, the philosophes, her ministers, historians, and favorites."

Markus Cruse: "Catherine's life [was] a rich, active, provocative life that refuses to cohere into a single story. In fact, Catherine herself seems to have preempted her biographers by having written several different memoirs that reflect her continuous attempts to explain the first half of her life. Just as there is no single memoir, there is no one Catherine. ... Larger than life, she made her mark in so many areas that any synthesis of Catherine as a woman, as Empress, and as a writer remains incomplete, in part because Catherine herself is elusive, despite, or perhaps because of, all she wrote - especially her memoirs. The urge to find the unguarded Catherine in her memoirs persists, not only because it makes her a more attractive person and less a cunning politician, but also because her pleasant, direct tone invites us to see her as honest and sincere."

Markus Cruse: "In Catherine's interpretation, the virtuous individual ruler can transform fortune by the force of her personality."