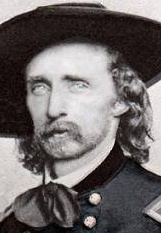 Quotes by and about George Custer

Custer: "I have yet to make the acquaintance of that officer of the army who, in time of undisturbed peace, desired a war with the Indians. On the contrary, the army is the Indian's best friend so long as the latter desires to maintain friendship."

Custer: "It is pleasant at all times, and always interesting, to have a village of peaceable Indians locate their lodges near our frontier posts or camps. The daily visits of the Indians, from the most venerable chief to the strapped papoose, their rude interchange of civilities, their barterings, races, dances, legends, strange customs, and fantastic ceremonies, all combine to render them far more agreeable as friendly neighbors than as crafty, bloodthirsty enemies." 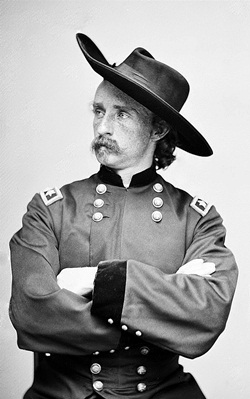 Custer: "The Indian ... can be said to have a character capable of adapting itself to almost every occasion. He has one character, perhaps his most serviceable one, which he preserves carefully, and only airs it when making his appeal to the Government or its agents for arms, ammunition, and license to employ them. ... Prominent chiefs invited to visit Washington invariably don this character [and] successfully contrive to exhibit but this one phase. Seeing them under these or similar circumstances only, it is not surprising that by many the Indian is looked upon as a simple-minded son of nature, desiring nothing beyond the privilege of roaming and hunting over the vast unsettled wilds of the West ... and never trespassing upon the rights of others."

Custer: "It is always a difficult matter the first few days of a march to inculcate upon the minds of the necessary hangers-on of a camp, such as teamsters, wagon-masters, etc., the absolute necessity of promptness and strict obedience to orders, particularly orders governing the time and manner of marching; and one or two days usually are required to be devoted to disciplining these unruly characters."

Custer: "I have more confidence in General McClellan than in any man living. I would forsake everything and follow him to the ends of the earth. I would lay down my life for him. He is here now. Every officer and private worships him. I would fight anyone who would say a word against him." 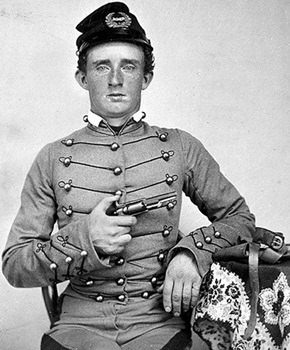 [When his father expressed regret that he was not able to do more for his son:]
Custer: "I never wanted for anything necessary. You and Mother instilled into me principles of industry, self-reliance, honesty. You taught me the value of temperate habits, the difference between right and wrong. I look back on the days spent under the home-roof as a period of pure happiness, and I feel thankful for such noble parents."

[Describing a letter from Custer:]
John Bingham: "I received a letter, a real boy's letter, that captivated me. ... Written in a boyish hand, but firmly, legibly, it told me that the writer - a 'Democrat boy,' that I might be under no misapprehension - wanted to be a soldier, wanted to go to West Point, and asked what steps he should take regarding it. Struck by its originality, its honesty, I replied at once."

John Bingham: "I had never seen him. ... I heard of him after the First Battle of Bull Run. In the report of that miserable fiasco he was mentioned for bravery. ... I heard of his exploit with pride, and hunted several times for my boy, but unsuccessfully. Then one day a young soldier came to my room without the formality of sending a card. ... He was out of breath, or had lost it from embarrassment. And he spoke with hesitation: 'Mr. Bingham, I've been in my first battle. I tried hard to do my best. I felt I ought to report to you, for it's through you I got to West Point. I'm...' I took his hand. 'I know. You're my boy Custer!'"

Marguerite Merington: "[As a child he] was docile and willing always."

Marguerite Merington: "He had been deficient in mathematics, having had little interest in it, and he knew how essential to entrance into the military academy was a proficiency in this subject. There was a normal school nearby, and here he made up his deficiency."

Marguerite Merington: "When he received his first month's pay, he rushed home ... where he surprised his mother, sitting in a rocker, her day's work done. He threw the precious money into her lap. 'My first earnings... for you!' he cried breathlessly." 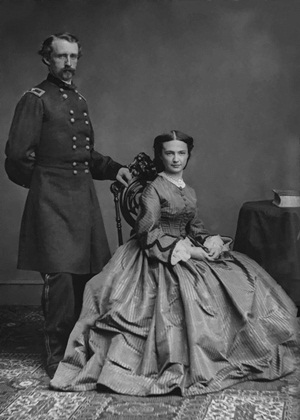 Marguerite Merington: "This expedition Captain Custer was detailed to lead, with a view to capturing the pickets and holding the north bank. Custer accordingly waded the stream, trying out its treacherous bed up and down for the best part of a mile. This was characteristic of Custer's method: the meticulously careful preparation, the sure, cautious approach, the sudden surprise attack. When biographers describe him as 'dashing,' they do scant justice to the solid basis for that spectacular climax. In warfare Custer was the perfect artist, building results on sound technique."