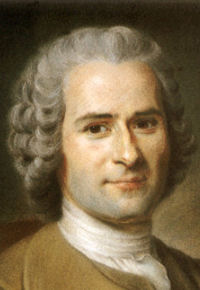 Quotes by and about Jean-Jacques Rousseau

Rousseau: "The heart has uncertain reasons."

Rousseau: "I hope that my readers will follow me in all the extravagances of my heart."

Rousseau: "I cannot go wrong about what I have felt, or what my feeling has led me to do."

Rousseau: "Whatever the heart admits as clear and evident will be true."

Rousseau: "In the long run, reason follows the bent of the heart."

Rousseau: "I am but an honorable man who knows nothing but is sure of his sentiment."

Rousseau: "[In my development] I have felt before I have thought."

Rousseau: "I have a passionate temperament and lively and headstrong emotions. My thoughts arise slowly and confusedly ... it is as if my heart and my brain do not belong to the same person."

Rousseau: "It is he who erects fences around his property who destroys civilization; the natural civilization of Man."

Rousseau: "Compassion is a natural feeling, which, by moderating the violence of love of self in each individual, contributes to the preservation of the whole species. ... It is rather in this natural feeling than in any subtle arguments that we must look for the cause of that repugnance, which every man would experience in doing evil, even independently of the maxims of education."

Rousseau: "Although it might belong to Socrates and other minds of the like craft to acquire virtue by reason, the human race would long since have ceased to be, had its preservation depended only on the reasonings of the individuals composing it."

Rousseau: "The human understanding is greatly indebted to the passions. ... It is by the activity of the passions that our reason is improved; for we desire knowledge only because we wish to enjoy; and it is impossible to conceive any reason why a person who has neither fears nor desires should give himself the trouble of reasoning."

Rousseau: "At this time my imagination took a turn which helped to calm my increasing emotions; it was, to contemplate those situations in the books I had read, which produced the most striking effect on my mind; to recall, combine, and apply them to myself in such a manner, as to become one of the personages my recollection presented, and be continually in those fancied circumstances which were most agreeable to my inclinations; in a word, by contriving to place myself in these fictitious situations, the idea of my real one was in a great measure obliterated. This fondness for imaginary objects, and the facility with which I could gain possession of them, completed my disgust for everything around me, and fixed that inclination for solitude which has ever since been predominant."

Rousseau: "My mind is frequently so engrossed by a single object, that beyond it the whole world is not worth a thought; this is the enthusiasm of a moment, the next, perhaps, I am plunged in a state of annihilation."

Rousseau: "My passions are extremely violent; while under their influence, nothing can equal my impetuosity."

Rousseau: "Man ... seems to receive the feeling of his own existence only from the judgement of others concerning him. It is not to my present purpose to insist on the indifference to good and evil which arises from this disposition, in spite of our many fine works on morality, or to show how, everything being reduced to appearances, there is but art and mummery in even honour, friendship [and] virtue."