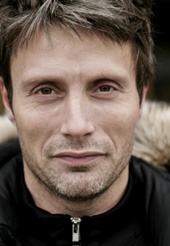 Quotes by and about Mads Mikkelsen

Mikkelsen: "I think life is fun."

Mikkelsen: "I was a happy kid. I smiled a lot."

Mikkelsen: "I am incredibly observant of what people are wearing. There really is something about the saying that clothing creates people . ... There's signal-value in all clothing. ... No matter what clothes it is, it does something to you."

[Asked about his own sense of style:]
Mikkelsen: "Predominantly I'm an Adidas guy who walks around in sports gear all the time because there's always a ball right next to me somewhere. I do a lot of sports. ... I do a lot of racing bikes, a lot of tennis; I play handball, some boxing, whatever pops up."

Mikkelsen: "I'm probably mostly into sporty [clothes]. I always wear clothes I can move around in, because what if someone suddenly had a ball or something... I enjoy sports and I love football and I just can't let a ball lie there."

Mikkelsen: "When I walk out the door, I need to look relaxed and casual. But I have to do it in that way where [my outfit] just looks right and where you can't see that a lot of thought went into it."

Mikkelsen: "I don't know a lot about cars, but I do like cars I find pretty. I am one of these guys who will buy the bicycle that is red. It might be a crap one, but if it looks good I will buy it. This year I bought a Ford Mustang from 1967 just because I think it's so beautiful. And not only is it beautiful, it also sounds fantastic and drives fantastic. I have a soft spot for things I find beautiful and obviously that's taste and everybody has an individual taste."

[Interviewer: "It sounds like you were a wild child when you were younger."]
Mikkelsen: "Yeah, pretty wild. I still am to a degree."

Mikkelsen: "If you ask me what makes [an actor] good, it is finding an honesty in there. Something you believe you can identify with in every character. You don't have to love your character, but you have to defend them."

Mikkelsen: "[When I'm with Nicolas Winding Refn] he only talks about films, I talk about sports. Imagine - him reading a book on directors, me on the other side of the room watching NBA."

Mikkelsen: "Me and Nicolas do not see each other if we're not working. Our work relationship is our relationship. We have totally contrary interests. I mean, he can only, and I say only, talk about films, and I can almost only talk about sports, and it's weird conversations, you know? But once we start working, we have a common goal."

The Telegraph: "Mikkelsen has no plans for 2017 yet. 'I don't have a goal; I don't have an ambition. My ambition has always been the project I am on. This sounds pretentious. The pretentiousness is that I just see a little too often that people have been ambitious in their careers. This is what they want to do, and all these little things are just stepping stones to get there.' He looks me straight in the eye. 'But you will never get there. You will always be a little off target. And this will have just been in vain then. So, why don't you just make this project your favorite project in the world? Then the next one. Then all of a sudden everything has been worthwhile. That has always been my philosophy. And so I have no idea where I'm going to end up.'"