Quotes by and about Manfred von Richthofen

Richthofen: "Only a wonderfully trained, practiced and observant eye can see anything definite when one is traveling at a great height and at a terrific speed. I have excellent eyes."

Richthofen: "The French attacking spirit is like bottled lemonade. It lacks tenacity."

Richthofen: "[One day] an approaching thunderstorm became noticeable. Clouds which looked like a gigantic pitch-black wall approached from the north. Old experienced pilots urged me not to fly. However ... I should have considered myself a coward if I had failed to [fly] because of a silly thunderstorm."

Richthofen: "Nothwithstanding the danger [of military flight] I experienced glorious moments which I would not care to have missed."

Richthofen: "[In the air I was] not ... frightened no matter what happened."

Richthofen: "I was delighted with bomb throwing. It gave me a tremendous pleasure to bomb [people] from above. Frequently I took part in two expeditions on a single day."

Richthofen: "[As a student] I found it difficult to bear the strict discipline and to keep order. I did not care very much for the instruction I received. I never was good at learning things. I did just enough work to pass. In my opinion it would have been wrong to do more than was just sufficient. ... The consequence was that my teachers did not think overmuch of me."

Richthofen: "I was very fond of sport. Particularly I liked gymnastics, football, and other outdoor amusements. I could do all kinds of tricks on the horizontal bar."

Richthofen: "I had a tremendous liking for all risky foolery. For instance, one fine day ... I climbed the famous steeple of Wahlstatt by means of the lightning conductor and tied my handkerchief to the top. I remember exactly how difficult it was to negotiate the gutters. Ten years later, when I visited my little brother ... I saw my handkerchief still tied up high in the air."

Richthofen: "I [imagined] myself at the head of [a] little [cavalry] troop sabering a hostile squadron, and was quite intoxicated with joyful expectation."

Jennifer Rosenberg: "To get noticed, from the ground and from the air, Richthofen decided to paint his plane bright red. ... No one had yet been so ostentatious as to paint their entire plane such a bright color. ... To many, the bright red plane seemed to make a good target. ... Yet when the plane and pilot continued to shoot down airplanes and continued itself to stay in the air, the bright red plane [became a cause of] respect and fear."

Richthofen: "There is a colossal difference between a giant plane and a chaser plane. The chaser plane is small, fast, quick at turning. It carries nothing apart from the pilot except machine guns and cartridges. The giant plane is a colossus. Its only duty is to carry as much weight as possible and it is able to do this owing to the huge surface of its planes. ... In going about in such a colossus one has no longer the sensation that one is flying. One is driving. In going about in a giant plane the direction depends no longer on one's instinct but on the technical instruments which one carries. ... In its body one can go for a walk. In one of its corners there is an indescribable something. It contains an apparatus for wireless telephony by means of which one can converse with the people down below. In another corner are hanging the most attractive liver sausages which one can imagine. They are the famous bombs which cause such a fright to the good people down below. At every corner is a gun. The whole thing is a flying fortress. ... I have never been able to feel enthusiasm for these giant barges. I find them horrible, unsportsmanlike, boring and clumsy. I rather like a machine of the type of 'le petit rouge.'" 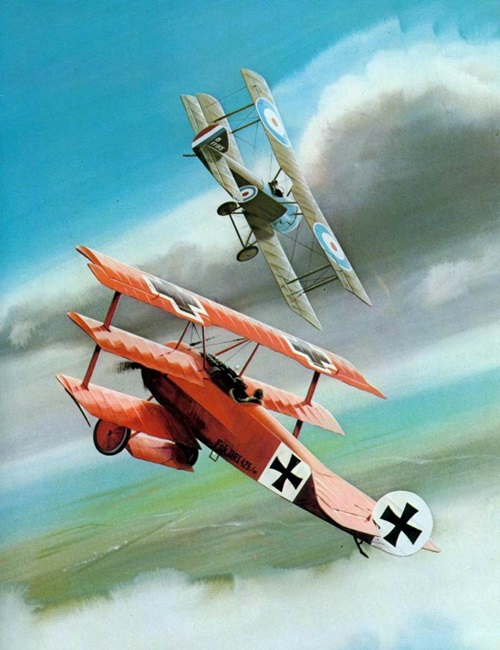