An Interview with Steven Pinker

Steven Pinker is the Johnstone Family Professor in the Department of Psychology at Harvard University and Chair of the Usage Panel of the American Heritage Dictionary. Dr. Pinker has been named as one of the world’s most influential intellectuals and his work has won numerous awards. He is the author of 10 books, including his latest volume, The Sense of Style, which is subtitled ‘The Thinking Person’s Guide to Writing in the 21st Century.’

Dr. Pinker, thank you for taking the time to answer a few questions regarding your new book, The Sense of Style, and perhaps also a question or two concerning your other books.

I’ve enjoyed your site, and am happy to chat with you. 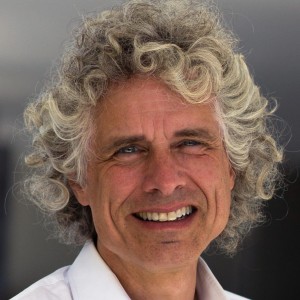 When I tell people that your new book is about writing in style, they typically remark that it was an obvious subject for you to tackle (since your own style is widely appreciated). But ideas that are blindingly obvious in hindsight are not always so obvious at the moment of their conception. How did you come upon the idea of writing a book about writing?

Like most of my book projects, it had been ricocheting in the back of my mind for many years, waiting for an occasion that would make me decide to do it as the next project. My previous book, The Better Angels of Our Nature: Why Violence Has Declined, was on genocide, war, torture, rape, sadism, and domestic violence. So I decided I should next write a book on really controversial topics, like split infinitives and fused participles. Seriously, I like to alternate books on human nature with books on language. The immediate impetus to do the style manual that had long been on my mind was the clumsy copy-editing done on the manuscript for Better Angels – the copy-editor was clearly following a number of rules robotically, like switching every passive sentence into the active voice. It’s true that academics, politicians, and corporate hacks overuse the passive, but it’s not true that you can improve prose by eliminating the passive—in many contexts, the passive is the better choice. I decided that the world needed a style manual that explained the rationale behind rules of style, rather than just listing them, and that those rationales ultimately came from my fields of expertise, psycholinguistics and cognitive science.

Your writing style is generally acknowledged to be elegant, entertaining, and clear. I assume that you, like most other good writers, weren’t born with this ability. How has your own process been in learning to write well? Can you share a little of your ‘coming of age’ story when it comes to acquiring the sense of style? Also, is there anyone in particular – a book, teacher, or role model – whom you look back upon as having had a foundational impact on your writing style?

Starting in grad school, I began to consume style manuals, both to improve my writing and as a source of phenomena that were relevant to my interest in psycholinguistics. But as I say in the new book, most writers acquire their craft not by consulting style manuals but by reading a lot, and savoring and reverse-engineering examples of good writing. I was particularly influenced by two gifted prose stylists who were also brilliant pioneers in the psychology of language: George A. Miller, famous (among other things) for his “Magical Number Seven Plus or Minus Two” paper, and my advisor Roger Brown, who wrote Words and Things in 1957 and founded the modern study of child language acquisition.

Books on how to write well generally have a reputation for being tedious. The market is saturated with titles still in print, and a common criticism is that they are all cut from the same cloth. As a prospective reader, how can I expect The Sense of Style to be different from other style manuals? 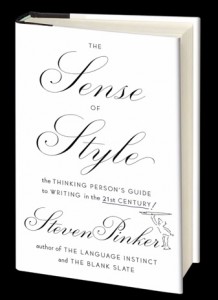 The “thinking person’s guide” in the subtitle alludes to the fact that I explain the rationale behind my advice, rather than issuing edicts, so that readers have a way of judging why and when they should apply a particular guideline. Together with cognitive science and psycholinguistics, this requires a look at the study of usage, and here my experience as Chair of the Usage Panel of the American Heritage Dictionary is relevant. Most people assume that dictionaries are like the rules committee of Major League Baseball – the stipulators and arbitrators of correctness. In fact, dictionaries cultivate an ear for actual usage, particularly among careful writers, and craft their definitions and usage notes accordingly. My advice on traditional questions of correct usage – whether to end a sentence with a preposition, whether aggravate can be used to mean “annoy” as well as “intensify” – are based on data and historical evidence on how these forms are used by careful writers, not on my peeves and prejudices.

One thing I hear that a lot of college professors inculcate into their students these days is that “good writing is re-writing.” As a consequence, a lot of college graduates seem to be under the impression that the more they re-write, the better. But on the other hand, a common criticism of first-time academic authors is that their books are “overwritten” and that they seek to impress with posture rather than substance. What advice would you give to fledgling authors who have yet to find their own sense of style?

The advice is good. The “overwritten” quality of academese does not come from too many revisions. Quite the contrary – it’s surprisingly easy to write in turgid mush. It takes a lot of work and skill to write clearly and elegantly.

It’s matured tremendously, and has become an indispensable part of psychology today. This is not to say that every hypothesis is correct, just that psychologists are increasingly realizing that no psychological explanation is complete unless it says something on the phylogenetic and adaptive basis of a trait.

Lastly, I’m sure our readers would find it amusing if you could point out an error of style that I have committed in this interview.

I didn’t spot any errors, but then I don’t think that playing “Gotcha!” is the best way to encourage good writing – clarity and coherence are far more important than avoiding the occasional error of usage or diction.

Well, I guess in your own way you ‘got me’ there – Dr. Pinker, thank you for doing this interview and best of luck with your new book, The Sense of Style.

Many thanks for having me on the site.

Dr. Pinker’s new book, The Sense of Style, is available via Amazon.