A Meditation on Parmenides

Michael Pierce is a contributing guest writer for CelebrityTypes. As always with guest writers on the site, Pierce’s piece represents his own insights and type assessments and not necessarily those of the site. Still, we very much enjoy his work and are pleased to be able to share it with our visitors.

Way back, before the fame of Socrates, there was this Greek named Parmenides. He wrote this poem called On Nature where he said that there is no such thing as empty space; the space that seems to separate you from me and me from this computer and any object from any other object does not exist in its own right, but is just how we perceive a certain kind of relationship between objects. 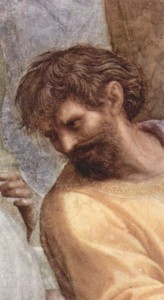 Think about it. If we had a tube, and we sucked everything out – air, bacteria, and every single atom, molecule and particle – so that it was a truly empty vacuum, and then we said, “Everyone, inside this tube is absolutely nothing!” But the definition of nothing is nonexistence, so how can we point at something that doesn’t exist? How can we point at something that by definition cannot be pointed at? Aren’t we then saying that “nothing” is really “something”? That nothingness exists in its own right? Wouldn’t it then cease to be nothingness? But then how can we suck all this supposed nothingness out of the tube?

Parmenides had a student named Zeno who helps to further illustrate this principle with a series of famous paradoxes. I won’t go into them specifically, but the running theme in all of them is as follows: We see point A and point B, and we see there is ten meters between them. Now, what if we move point A forwards to cover half of that distance? Then it would be five meters. Now how about another half? That would be two point five meters. Then again: one and a fourth of a meter. Again: 0.625 meters. 0.3125 meters. 0.15625 meters. 0.078125 meters. 0.0390625 meters…

You can try it out on your own calculator until it runs out of decimal places, but never will the calculator actually declare the distance to be 0. Point A can never truly touch point B. Why not? Because as long as something exists, it must have some sort of mass, as shown by Parmenides, and if it has mass, it can be divided infinitely. But if that’s true, then how is movement through space possible? How does separation even work if there is an infinite amount of space between each of us? And how can there even be an “amount” of nothingness in the first place to separate you and me?

Taking it a step further, how can there be movement through time? Don’t we perceive time in a similar fashion to movement, as seconds or minutes or hours marching ceaselessly from the past through the present into the future? But if Point A takes 1 second to traverse 5 meters towards point B, then it will take 0.5 seconds to travel the next 2.5 meters, and 0.25 to travel 1.25 meters, and you get the idea.

Space and time, or as the physicists tell us, spacetime, do not have substance and do not exist in their own right. Space is not a receptacle of matter; it is how we perceive a certain kind of relationship between objects. But what does that mean? What do things “really” look like? As Parmenides theorized, because nothing is truly separated by either space or time, then everything must really be smashed together, compressed into one moment, one infinite and infinitesimal whole, everything in one point, existing for one moment, for all of eternity, without beginning or end.

So, metaphysically speaking, you, me, Parmenides, Zeno, Friedrich Nietzsche, Barack Obama and Jennifer Aniston are hugging it out across spacetime. Although we are “separate”, but not in the sense that there is a gap of nothingness between us, but in the sense that our “separation” is how we perceive a certain kind of relationship between each other.

God is often said to exist outside of spacetime, which would explain how God is omnipotent, because God can see all time happening at once. We on the other hand experience it moment by moment, like an ant burrowing through a loaf of bread.

If there is truth to this theory, I don’t believe this would necessitate any loss of free will. Our lives are not predestined just because they “already exist” in some sense. Whatever choices we are making in the future we are making right now in the metaphysical sense, as well as all the choices we’ve made before: our whole being, the whole worm of our time shape, makes its choices all at once, all in the same moment, but we experience it one slice of bread at a time. But why? I think that by focusing on one moment after another, rather than all at once, it allows us to make edits to our shape, something very difficult if not impossible when viewing the moment all at once. By viewing our time shape from this oddly limited perspective, we are unable to see our future, but able to remember our past, and therefore we are able to make informed decisions without inhibition of changing our future. Therefore nothing is set until the end. No mistake you make now is a final judgment; our personality, what we become, is not set in stone until the very, very end.

Hopefully we will use this time to become something better than whatever we were before we were born, because when the eternal moment has passed, and we exit from the stage, we will be whatever we choose to be for eternity, without beginning or end.

It’s a bit like Nietzsche’s Eternal Reoccurrence (which he actually had from Empedocles, ed.), which implores humanity to make the best life in spacetime as possible, for awaiting us after death is not a better opportunity for life, but only a re-occurrence of whatever kind of life we chose here, without a single thing changed. The question then is: what kind of life do you want to live over and over for eternity? As a prophet from the ancient Americas once said, “This life is the time for men to prepare to meet God.”

So, you may ask – what in the world does this have to do with Jungian typology?

Not that much, really, except that I believe typology can help us in our quest to “improve our time while in this life [before] the night of darkness wherein there can be no labor performed,” as the ancient American said. I think it’s one of many useful tools in that quest. While I believe there are tools essential for every human being in that quest, and I don’t believe typology is by any means essential, I still think it can be a great help, and that is the reason I write articles and make videos about it. I’m not even exaggerating to sound more awesome. I think that if one of my offerings helps one person better understand themselves and hold themselves a little better, then I ought to be satisfied.