Marie-Louise von Franz (1915 – 1998) was a Jungian psychologist and close associate of Jung. In her book, C.G. Jung: His Myth in Our Time, von Franz lays out some general principles of Jungian typology as she sees them, which we reiterate below. All quotations are from the Inner City Books 1998 edition of the book. 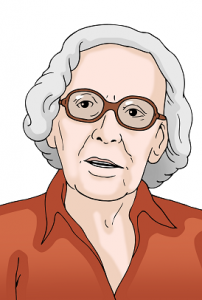 1: As Jolande Jacobi also reported Jung to have said, Intuition is not synonymous with Imagination, Fantasy, or Creativity:

“Intuition is not identical with fantasy which Jung regards as a human capacity independent of the functions.” – Von Franz:  C.G. Jung: His Myth in Our Time p. 47

“Fantasy can find expression via thinking, feeling, intuition and [sensation] and is therefore probably an ability sui generis, with deep roots in the unconscious.” – Von Franz:  C.G. Jung: His Myth in Our Time p. 47n30

“[Jung] rejects the usual notion that artistic inspiration is limited to the intuitive type. … Fantasy is indeed the source of all creative inspiration, but it is a gift that can come to any of the four [function] types.” – Jolande Jacobi: The Psychology of C.G. Jung (Yale University Press 1973) p. 24

2: Jung’s Typology Is a System of Four Functions (Each with Two Orientations), Not of Eight Functions:

“… when Jung … studied the way in which individuals adapt to their environment … he discovered that one could divide these attempts at adaptation into four basic forms of psychic activity or psychological functions. … [These] four functions provide a sort of basic orientation for the ego in the chaos of appearances.” – Von Franz:  C.G. Jung: His Myth in Our Time pp. 46-47

“[The fourth function] nearly always remains largely unconscious, for which reason Jung calls it the ‘inferior function.’ Here the light of ego-consciousness turns into twilight. Our attempts to adapt with the fourth function are to a large extent uncontrolled and often fall under the influence of … the unconscious personality. … The fourth function … will be primitive, spontaneously arbitrary, intense, undisciplined and archaic. Moreover, it behaves somewhat in the fashion of the opposite attitude type, which means that, for example, the feeling of an introverted thinking type is extraverted, bound to the object, and the sensation of an extraverted intuitive will be introverted, etc.” – Von Franz:  C.G. Jung: His Myth in Our Time p. 48&n34

4: According to von Franz, Freud Had Inferior Te:

5: Jung’s Typology Cannot Be Understood without Reference to Heraclitean Logic:

“[In Jung’s typology] the differentiation between subject and object, between inner and outer, gradually takes place. This contribution of Jung’s to the psychology of consciousness … received almost no recognition in the wider field of philosophic-academic psychology, because it is concerned with a description of ego-consciousness which cannot be understood without experience of its mirror-world, the unconscious.” – Von Franz:  C.G. Jung: His Myth in Our Time p. 46n28

“…as early as the school of Parmenides the structural image of a sphere … as the form of the ultimate basic principle of the cosmos, emerged. The natural philosophers probably took this image from the older pantheistic Orphism, in which the godhead was thought of as an all-embracing presence with cyclical or spherical form, encompassing beginning, middle and end. The same image appears again in Empedocles. In his view, when the cosmos is under the dominion of Eros, it is “on all sides like to himself and everywhere without end, Sphaeros, the sphere-shaped, above the loneliness prevailing all around, filled with joyful pride.” In Anaximander’s case the world-principle is the Apeiron (the limitless), but at the center of the world there is a ‘sphere which firmly encircles the cosmos.’ For Xenophanes the cosmic god is limited and spherical, ‘always and everywhere homogeneous,’ ‘shaking the universe … by the thought-power of his spirit.'” – Von Franz:  C.G. Jung: His Myth in Our Time p. 142, cf. Dietrich Mahnke: Unendliche Sphäre und Allmittelpunkt (Günther Holzboog 1966) pp. 243-244

Image of von Franz in the article commissioned for this publication from artist Georgios Magkakis.