Boye Akinwande is a contributing guest writer for CelebrityTypes. As always with guest writers on the site, Akinwande’s own insights and assessments are his own and not necessarily the same as those of the site. In this article, Akinwande elaborates on the concept of function axes and how to illustrate their opposition, mirroring, and tension.

This is my second installment of a series attempting to illustrate all of the function axes. The initial remarks and disclaimers I made in Part 1 of this series are still in effect.

As I have argued in my article, Determining Function Axes Part 3, Fe/Ti ontology cares less about the empirical properties of objects and more about the ideational commonalities that unite them. This latter disposition is somewhat like Plato’s Theory of Forms where objects in the sensible world are but shadows of ideal ideational objects that exist as pure thought.

With Fe/Ti types, the empirical world, with its uncontrollable, sprawling mess of facts and things and particularities, is – without any effort on the subject’s part – condensed into ideal objects and cleaner principles in the mind.

Both my Ti and Fe diagrams aim to illustrate how a subject operating under this mode of cognition sees other individuals as expressions of the ideal category of ‘human being’ and therefore as extensions of themselves.

With my Ti diagram, since the Ti function is chiefly concerned with identifying and clarifying impartial principles, regarding human beings as principally the same leads to an internally consistent mental categorization where people are interchangeable building blocks in a fair and equal system. In the diagram, the solid lines leading from all three human beings back to the Ti type’s own 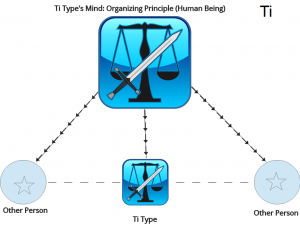 mind illustrate how all empirical manifestations of a category – in this case human beings – are regarded as belonging to the same order due to the Ti type’s tendency to group these instances in his mind by virtue of impartial principles and models. The dotted lines between the Ti type and other human beings represent how each concrete manifestation of man is grouped together by invisible ties to a principle in the mind and not on the emergent level or in the external world. The famed impartiality or impersonal nature of Ti types is here expressed by the complete non-discrimination concerning whether the particular instance of a man happens to be the Ti type themselves or another human being. 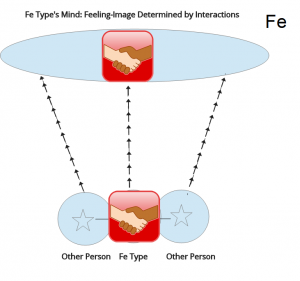 personalized manner. The Fe type’s efforts to build rapport with others on the basis of the shared sentiments and common goals they can identify between themselves and others form a totality which leaves an imprint on the psyche of the Fe type: Here, a multitude of sentiments, values, and reactions are added up to form an inclusive outlook, encompassing both self and others.

With Ti types, we saw how the impartial principle determined the status of particular individuals. With Fe, things are really the other way around: It is the sociality and reactions of particular individuals that determine the overall feeling-image in the Fe type’s mind. (This feeling-image could equally well be called a ‘principle,’ if not for the fact that it would be very confusing for people who are not well-versed in Jungian typology. That is to say, it can be called a principle on the phenomenological level).

However, there are still some differences to be noted here: Since the Ti type starts with the impartial principle, their representation of the commonalities between individuals will be impersonal, come what may. For this reason, they may seem robot-like and their rather inflexible approach may be too far removed from the actual sentiments of people. The Fe type tends to have the opposite problem: Starting with people as their cognitive nexus, and seeing people as the carriers of principles and values, the Fe type may at times be too beholden to the feedback and opinions of the people they encounter.

Hence, in my Fe diagram the subject is in much closer proximity to others than in my Ti diagram. The Ti type could not move closer to other people even if he wanted to, since the impersonal principle has determined a fixed distance between all. While Fe types have more means available to modulate the difference between themselves and others (such as withdrawing from social life and immersing themselves in impartial book knowledge for long periods of time), most Fe types will still feel an inclination to incorporate everyone’s differing perspectives into their own internal feeling-image, even if they disagree with what was voiced. My diagram therefore represents Fe types as being closer to others, since that is their foundational psychic tendency, even if reflective Fe types may draw away from it at times. 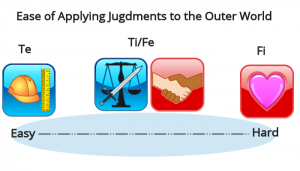 Because the Fe/Ti axis operates on the basis of commonalities, Fe/Ti types are typically less direct or decisive than Te types in arriving at and applying judgments to their environment. But on the other hand, they are often less inclined than Fi types to withdraw their judgments from the outer world altogether. Fe/Ti types are more likely to maintain that the same set of judgments must apply to all members of a given ideational category and could thus be said to strike a middle ground between the typical exterior judging attitude seen in Te and Fi types. In this respect we may say that the polarization between the ends of the Te/Fi axis is actually much stronger than the polarization between Fe and Ti.