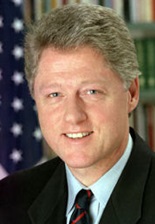 "My speechwriters must have been tearing their hair out, because as we practiced [my inaugural speech] between one and four in the morning on Inauguration Day, I was still changing it."