You are here because one of your friends linked you to their Feminism Test result: 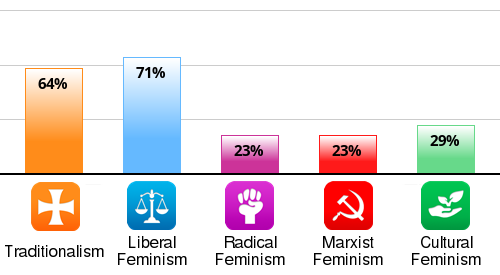 Traditionalism refers to illiberal strands of philosophy which seek to preserve what they see as the “natural” and “traditional” order of things. In the past, this standpoint was chiefly represented by early 20th century thinkers such as Julius Evola and Rene Guenon. After a hiatus following World War II, Traditionalism has resurfaced as a new type of “conservatism to the right of mainstream conservatism.” It is chiefly popular among younger voters who are skeptical of the liberal enlightenment principles that mainstream conservatives accept, uniting instead behind national pride, a critical stance towards feminism and Islam, and resistance to globalism.

Liberal Feminism refers to feminist philosophy rooted in enlightenment principles. Its classical works were penned by thinkers such as Mary Wollstonecraft and John Stuart Mill. This type of feminism holds that men and women are each other’s equals and as such deserve equal rights. It is this type of feminism that people allude to when they say “feminism just means equal rights.”

As opposed to other forms of feminism, Liberal Feminism is individualistic (rather than group-based): Men and women deserve equal rights because both are individuals. Rights are granted to individuals, not genders or groups.

Liberal Feminism believes in equality of rights, not in equality of outcomes. For example, if a profession is dominated by only one gender, that does not necessarily mean that something is wrong: It could be the result of individuals making different decisions in life.

Radical Feminism holds that men oppress women through internalized forms of dominance (i.e. patriarchy). Women must come together and end this oppression by rejecting traditional gender roles. Putting women in dresses, making them wear make-up and so on makes them sexual objects that perpetuate male dominance. Women must refuse to comply with the beauty standards that the patriarchy expects.

Radical Feminists see a link between men’s objectification of women and sexual violence and abuse. Prostitution, pornography, and advertisements that sexualize women are therefore not decisions that can be left to individual choice. They must be resisted by women everywhere as forms of male oppression.

As opposed to Liberal Feminism, which takes the individual as its focus, Radical Feminism holds that since men have oppressed women for so long, it may be necessary to discriminate against men in the process of revolutionizing society (for example by prioritizing women for high-end jobs or shutting men out of positions of power for a time).

Marxist Feminism holds that the mode of production in capitalist societies is organized in a way that favors men’s abilities over women’s. As opposed to Radical Feminists, who see patriarchy as the source of gender inequality, Marxist Feminists see capitalism as the cause. Marxist Feminists argue that the structures of capitalist economies coerce women into assuming responsibility for unpaid domestic tasks (such as homemaking and child-rearing) while leaving men free to earn money in the public sphere. Gender equality can therefore never be achieved in a capitalist economy.

While Marxist Feminism was originally about economic revolution, more recent writers have changed their focus from economic issues to cultural ones, placing more of an emphasis on the fight for social justice than the fight to topple capitalism.

Not just women, but also people of color, sexual minorities, and transgender people have become focal points for Marxist Feminism in recent years. Intersectional Feminism is essentially a fusion of Marxist Feminist and Cultural Feminist ideas.

Cultural Feminism holds that women and men are essentially different and that women are generally more nurturing, more empathic, and less violent than men. Cultural Feminists seek to celebrate these qualities, which they believe have been oppressed by men.

Cultural Feminists believe that both men and women are hurt by contemporary male-dominated society, which they see as encouraging male behavior such as competition and conflict. According to Cultural Feminism, if women were given more power there would be less violence, fewer wars, and more understanding in the world.

The goal of Cultural Feminism is not to bring about some pre-scripted political revolution, but to improve tolerance and diversity by celebrating women's special qualities and unique experiences. Like Marxist Feminism, Cultural Feminism has in recent years expanded its focus from championing not just the perspectives of women, but also those of sexual and racial minorities as well.