TThe Hunger Games Character Test is an unscientific and “just for fun” personality test that has achieved a surprising amount of popularity through the success of the Hunger Games franchise.

This assessment will determine which of seven main Hunger Games characters you most closely resemble, using genuine psychometric items.

I have little interest in business-related matters.

The IDRlabs Hunger Games Test (IDR-HGT©) was developed by IDRlabs International. The IDR-HGT utilizes characters from The Hunger Games franchise but is not in any way associated with series novelist Suzanne Collins, film director Gary Ross, Color Force, Lionsgate Films, or any other professionals or professional bodies affiliated with The Hunger Games. No infringement is intended by the present test.

The IDRlabs Hunger Games Test has been created by professionals certified in the use of numerous psychometric instruments, who work professionally with psychological instruments and personality assessments. While the characters considered for this test are fictitious, the present test does use real psychometric items to ascertain the test takers’ closest character match based on aspects of their personality.

Tests related to the Hunger Games franchise, whether they are professional, educational, or for entertainment purposes, are simply first considerations of some aspect of your personality. In the case of the present test, your results will provide information as to your personality match with one of seven major characters (Katniss Everdeen, Peeta Mellark, Gale Hawthorne, President Coriolanus Snow, Haymitch Abernathy, Effie Trinket, and Primrose Everdeen). However, no measurement ever created can match your personality with complete accuracy or replace educating yourself regarding the relevant personality theories. For more information regarding the above characters specifically, you can consult official Hunger Games franchise materials.

The test provides feedback such as the following: Katniss Everdeen: Courageous and strong, Katniss famously sacrificed herself to take her younger sister’s place in the Hunger Games. Although not outwardly sociable or warm, Katniss is deeply loyal and never lets down the people she loves. Katniss feels most at home in the woods, alone or with her close friend Gale, and she does not feel comfortable in crowds or as the center of attention. Due to her mother’s depression following the passing of her father, Katniss has had to become a practical, efficient provider for her family by any means necessary. She is resourceful and quickly adapts to the situation that is before her, using her athleticism and fighting skills to aid in her survival.

Or: Peeta Mellark: Peeta is selfless, compassionate, and caring to the core, always thinking of others and putting their well-being before his own. He has been in love with Katniss from a young age and did everything he could to protect her when they were tributes together during the 74th and 75th Hunger Games. As children, Peeta had purposefully burned a loaf of bread at his parents’ bakery so he could give it to Katniss when she was bordering on starvation. Although it took Katniss longer to realize she was in love with Peeta, they did eventually unite as a couple and ended up with two children.

As the publishers of this Hunger Games Test, we have strived to make the test as reliable and valid as possible by subjecting it to statistical controls and validation. Prior to completing our free online test, please note that the test is provided “as-is” and should not be construed as providing professional advice of any kind. For more details about the present test or our other online tests, please consult our Terms of Service. 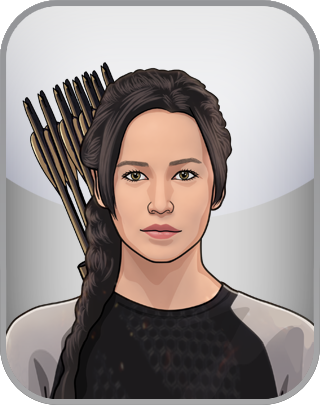 1. Free. This Hunger Games Test is available to you free of charge and will allow you to obtain your scores as related to the personality profiles of seven movie characters.

4. Made by professionals. The present test has been made with the contributions of individuals who work professionally with psychological research and psychometrics.