The Movie Psychopath Test is an unscientific and “just for fun” personality test that will determine which of six psychopathic movie characters is your closest match. The test uses genuine psychometric items to ascertain your best fit.

Who is your movie psychopath match? For each of the following statements, indicate your level of agreement below.

Others look up to and admire me.

The IDRlabs Movie Psychopath Test (IDR-MPT©) was developed by IDRlabs International. The fictional characters are the properties of the writers and studios who created them. No infringement is intended by the present test.

The IDRlabs Movie Psychopath Test has been developed by professionals experienced with personality and psychological assessment. The present test uses genuine psychometric items to assign users their closest character match, based on aspects of their personality.

Free online quizzes such as this are merely first glances at some aspect of your personality or psychological state. Your results will provide a clue as to your personality match with one of six movie psychopaths (Patrick Bateman, Anton Chigurh, Daniel Plainview, Miranda Priestly, Louis Bloom, and Jack). However, no assessment ever created can match your personality with total accuracy or can replace educating yourself about the relevant personality theories.

The present year (2020) marks the 20th anniversary since one of film history's most iconic psychopaths appeared on the big screen: Patrick Bateman. The film adaptation of Bret Easton Ellis' novel American Psycho features Christian Bale playing the slick and luxury-conscious stockbroker who commits one atrocious murder after another. Despite Bateman's cavalcade of murders, however, he is never held accountable for his actions. His social circle does not care about that since they are too focused on the internal race for status among themselves. Upon release, there were divided opinions as to whether the film was intended as horror or satire. Audiences typically reacted with either indignation or excitement when they saw it.

Film expert Per Juul Carlsen recalls the reaction to the film: “American Psycho came out in response to the yuppie environment that prevailed in the financial world at the time. Patrick Bateman was the perfect image of the money man bent on conspicuous consumption, who held back nothing in the pursuit of his wants.”

As the publishers of this free online test, we have endeavored to make the test as reliable, valid, and comprehensive as possible by subjecting the test to statistical controls and validation. Before taking our online test, please remember that the results are provided “as-is” and should not be understood to be equal to professional assessment, recommendations, or intervention of any kind. For more details about the present test or our other online psychological tests, please consult our Terms of Service. 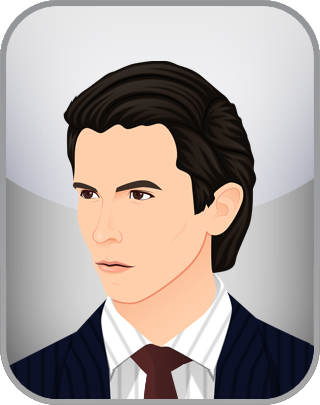 1. Free. This online Movie Psychopath Test is delivered to you free of charge and will allow you to obtain your scores as related to six psychopathic movie characters.

2. Based on real psychometric items. This test was created using genuine psychometric items, as commonly utilized in personality exploration and supported by peer-reviewed research as published in academic journals.

4. Developed by professionals. This Movie Psychopath Test was created by researchers and psychology professionals who work with psychometrics.