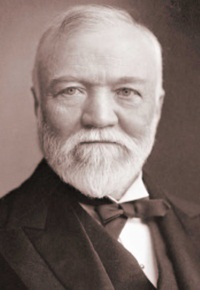 Quotes by and about Andrew Carnegie

Carnegie: "Where one is born is very important, for different surroundings and traditions appeal to and stimulate different latent tendencies in the child. ... Till his last day, the early impressions remain. ... They are always rising and coming again to the front to exert their influence."

Carnegie: "[I still have] a vein of ... patriotism which will cease to exist only with life. ... The intensity of a ... boy's patriotism ... constitutes a real force in his life to the very end."

Carnegie: "I [have an] optimistic nature [and an] ability to shed trouble ... making 'all my ducks swans,' as friends say I do."

Carnegie: "A sunny disposition is worth more than [a monetary] fortune. Young people should know that it can be cultivated; that the mind like the body can be moved from the shade into sunshine."

Carnegie: "It is more blessed to give than to receive."

Carnegie: "In [my] life ... I did not understand steam machinery, but I tried to understand that much more complicated piece of mechanism - man."

Carnegie: "Sentiment counts for so much in the disagreements between capital and labor. ... I believe the best preventive of quarrels to be ... sincere interest in the men, satisfying them that you really care for them and that you rejoice in their success."

Carnegie: "This I can sincerely say - that I always enjoyed my conferences with our workmen ... and that the better I knew the men the more I liked them." 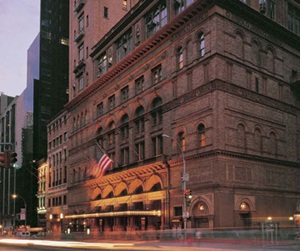 Carnegie: "If you wish to play peace-maker, seat adversaries next to each other. ... True it is, we only hate those whom we do not know."

Carnegie: "When you stand up before an audience, reflect that there are before you only men and women. You should speak to them as you speak to other men and women in daily intercourse. If you are not trying to be something different from yourself, there is no more occasion for embarrassment than if you were talking in your office to a party of your own people - none whatever. -->It is trying to be other than one's self that unmans one. Be your own natural self and go ahead."

Carnegie: "Slight attentions or a kind word to the humble often bring back reward. ... No kind action is ever lost. ... or some similar service. ... I am indebted to these trifles for some of the happiest attentions and the most pleasing incidents of my life.-->" 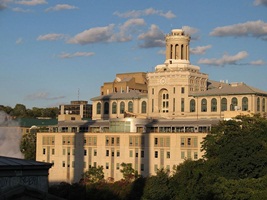 Carnegie: "[When my workers chose to celebrate me it] made a lasting impression. I knew how much I cared for them and it was pleasing to know that they reciprocated my feelings. Working-men always do reciprocate kindly feeling."

Carnegie: "He is the happy man who feels there is not a human being to whom he does not wish happiness, long life, and deserved success, not one in whose path he would cast an obstacle nor to whom he would not do a service if in his power." 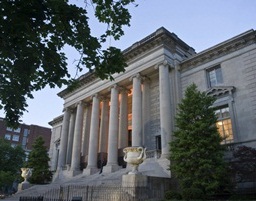 Carnegie: "Children of honest poverty have the most precious of all advantages over those of wealth. The mother, nurse, cook, governess, teacher, saint, all in one; the father, exemplar, guide, counselor, and friend! Thus were my brother and I brought up. What has the child of millionaire or nobleman that counts compared to such a heritage?"

New York Times: "Carnegie was optimistic and outgoing [and] made friends easily."

James Graham Johnston: "[In his youth, Carnegie excelled as a messenger boy] and was quickly recognized as one of the best and most attentive. He memorized the names of prominent people so that he could acknowledge them when he saw them in public."

James Graham Johnston: "[As he grew older] he became more extraverted than ever."

James Graham Johnston: "He was an affirming cheerleader [of men] and an eager connector."

He was thus engaged in July, 1914, when the war clouds began to gather, and when the fateful news of the 4th of August reached us [he stopped writing].... the world disaster was too much. His heart was broken."

Carnegie: "If we truly care for others we need not be anxious about their feelings for us. Like draws to like."

Carnegie: "A great business is seldom if ever built up, except on lines of the strictest integrity. A reputation for 'cuteness' and sharp dealing is fatal."

Carnegie: "I have no faith in the policy of scattering one's resources, and in my experience I have rarely if ever met a man who achieved preeminence in money-making - certainly never one in manufacturing - who was interested in many concerns. The men who have succeeded are men who have chosen one line and stuck to it."

Carnegie: "I am a firm believer in the doctrine that people deserving necessary assistance ... usually receive it. There are many splendid natures in the world - men and women who are not only willing, but anxious to stretch forth a helping hand to those they know to be worthy. As a rule, those who show willingness to help themselves need not fear about obtaining the help of others."

Carnegie: "[As a boy I looked up to] William Wallace, the hero of Scotland. It is a tower of strength for a boy to have a hero."

Carnegie: "The thoughtful youth is naturally carried along and disposed to concur [with the opinions of his elders]. He cannot but think ... that what is believed by the best and the highest educated around him - those to whom he looks for example and instruction - must be true. He resists doubt as inspired by the Evil One seeking his soul, and sure to get it unless faith comes to the rescue."

Carnegie: "Most quarrels become acute from the parties not seeing and communicating with each other and hearing too much of their disagreement from others. They do not fully understand the other's point of view and all that can be said for it. Wise is he who offers the hand of reconciliation should a difference with a friend arise. Unhappy he to the end of his days who refuses it."

Carnegie: "It is essential to permanent success that a house should obtain a reputation for being governed by what is fair rather than what is merely legal. A rule which we adopted and adhered to has given greater returns than one would believe possible, namely: always give the other party the benefit of the doubt. This, of course, does not apply to the speculative class. An entirely different atmosphere pervades that world. Men are only gamblers there."

Carnegie: "A new judge is very apt to stand so straight as really to lean a little backward. Only experience teaches the supreme force of gentleness. Light but certain punishment, when necessary, is most effective. Severe punishments are not needed and a judicious pardon, for the first offense at least, is often best of all."

Carnegie: "Man does not live by bread alone. I have known millionaires starving for lack of the nutriment which alone can sustain all that is human in man, and I know workmen ... so-called poor men, who revel in luxuries beyond the power of those millionaires to reach."

Carnegie: "There comes a time, although the fond mother cannot see it, when a grown son has to put his arms around his saint and kissing her tenderly try to explain to her that it would be much better were she to let him help her in some ways; that, being out in the world among men and dealing with affairs, he sometimes sees changes which it would be desirable to make. ... Especially should the slaving mother live the life of ease hereafter, reading and visiting more and entertaining dear friends - in short, rising to her proper and deserved position as Her Ladyship. Of course the change was very hard upon my mother, but she finally recognized the necessity for it."

Carnegie: "Among the conditions of life or the laws of nature, some of which seem to us faulty, some apparently unjust and merciless, there are many that amaze us by their beauty and sweetness. Love of home, regardless of its character or location, certainly is one of these. And what a pleasure it is to find that, instead of the Supreme Being confining revelation to one race or nation, every race has the message best adapted for it in its present stage of development. The Unknown Power has neglected none."

Carnegie: "How foolish we are not to recognize what we are best fitted for and can perform, not only with ease but with pleasure, as masters of the craft. More than one able man I have known has persisted in blundering in an office when he had great talent for the mill, and has worn himself out, oppressed with cares and anxieties, his life a continual round of misery, and the result at last failure."

Carnegie: "My uncle, like all our family, was a moral-force man and strong for obedience to law."

[On his first job:]
Carnegie: "A messenger boy in those days had many pleasures. There were wholesale fruit stores, where a pocketful of apples was sometimes to be had for the prompt delivery of a message; bakers' and confectioners' shops, where sweet cakes were sometimes given to him. He met with very kind men, to whom he looked up with respect; they spoke a pleasant word and complimented him on his promptness, perhaps asked him to deliver a message on the way back to the office. I do not know a situation in which a boy is more apt to attract attention, which is all a really clever boy requires in order to rise. Wise men are always looking out for clever boys."

[After getting a raise:]
Carnegie: "On Sunday morning with father, mother, and [my brother] at breakfast, I produced the extra two dollars and a quarter [that my employer had given me as a raise]. The surprise was great and it took some moments for them to grasp the situation, but it soon dawned upon them. Then father's glance of loving pride and mother's blazing eye soon wet with tears, told their feeling. It was their boy's first triumph and proof positive that he was worthy of promotion. No subsequent success, or recognition of any kind, ever thrilled me as this did. I cannot even imagine one that could. Here was heaven upon earth. My whole world was moved to tears of joy."