Quotes by and about Annie Clark

Clark: "[The music business] is not a meritocracy. The best idea doesn't always win, so there's not a whole lot of sense to it in terms of who thrives and who doesn't."

Clark: "I always felt like a weirdo. ... I made a place with music where I could exist and not feel weird and alien."

Clark: "I always wanted to make my own music, so even when I was playing in other bands, I just looked at it like it was an apprenticeship or something. ... That was always my plan."

Clark: "I spent my whole life having a certain amount of trepidation about random things, things I couldn't control."

Clark: "I tried [being one with] nature, and it didn't work out."

Clark: "It's hard to know what to say on stage exactly sometimes." 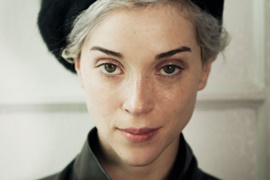 Clark: "The teetering in the music, the splotches, I put that in because that's how I experience life. There's always a little bit of mania to find a way through, to own."

Clark: "[Playing the guitar is] the best thing. It's always a balancing act, inviting in the chaos, the variables, and then managing them."

Clark: "I like adrenaline rushes. ... But there's a certain amount of what happens onstage that I don't remember. You kind of go into a different state if you're really in the moment, and something else takes over. Instinct? I don't know what you call it. But, yeah, I like it. I want to feel something, and it's sort of like you're a drug addict, and the drug is in your own brain. I want to feel my dopamine rush. I want to feel the adrenaline. And as the show goes on, you try different things to get that same rush."

Clark: "There's always a gulf to be traversed between reality and perception. So if you have a situation where you've beta-tested the reality, then you can refine it."

Clark: "Feeling ill-prepared for whatever it is you're supposed to be doing is terrifying."

Clark: "[I] would definitely prefer to err on the side of mystery."

Clark: "I never had a plan B in terms of my life or my career."

Matt Fink: "For someone who spends much of her time in her own head, being onstage provides an opportunity to get outside of herself."

The Guardian: "She says that despite the rigidity and planning that goes into [her live] show, she never worries that it will come across as contrived."

Rolling Stone: "At home, using audio software, she recorded more ornate original compositions. 'I always had this other thing, this stuff I was making on my own,' she says. ... Computers are still part of Clark's method: 'I discovered I could write stuff that I couldn't play; my ears are smarter than my fingers.'"

Rolling Stone: "In Clark's adolescence, her love of Nirvana led her to groups like Bikini Kill and Sleater-Kinney. 'I was just as into the politics as I was into the music,' says Clark, 'maybe even more. It was tough and confrontational.'"

The Telegraph: "[She likes] the idea of herself as 'the place poetry comes to die.'"

The Telegraph: "Clark's clothes may be loud ... but, temperamentally, she is quiet and precise."

Rolling Stone: "[She is] the smartest indie-rock star of her generation."