Quotes by and about Anthony Hopkins

Hopkins: "[When acting I] go over [the script] 250 times. ... As I'm going through it, I become very familiar with the nature of the person I'm going to play, and all kinds of weird things start to happen - tone of voice and images come to me."

Hopkins: "I don't like the overly academic or analytic approach to acting."

Hopkins: "People ask me things like, 'How did you play the butler in The Remains of the Day with such stillness?' And my answer is, 'Well, I just didn't move very much.' People want all these deep and complicated answers from actors and the truth is I'm not very complicated."

Hopkins: "I don't have a complicated mind."

Hopkins: "You are paid to do a job and you have to do it the best you can. I don't approve of actors who won't come out of their trailer if they don't feel like it - it's a selfish, abominable behavior." 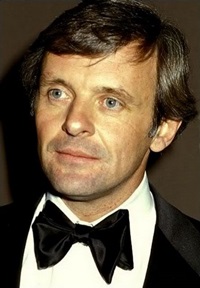 Hopkins: "Ask nothing, expect nothing. That's my creed. We're all just a bunch of sinners crashing around in the darkness."

Hopkins: "It rained a lot in Wales. Which gave me a sense of melancholy ... I suppose."

[During a discussion of Hopkins' interest in classical music the interviewer asks what kind of conductor he would have been:]
Hopkins: "One who knew the names of every member of the orchestra."

Hopkins: "Randy Jackson is my only famous friend. ... He's a terrific guy. I love his soul. 'Hey, dawg!' I think he's terrific. I love his compassion, because he's so fair with everyone."