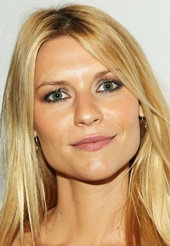 Quotes by and about Claire Danes

[On turning down Kate Winslet's role in 'Titanic':]
Danes: "I had just made a romantic epic with Leonardo. [Doing another one] seemed redundant to me."

Danes: "I got excited again about television from watching 'The Wire.' That show blew me away; I just could not believe how enormous and layered this world was that they'd created, and how deeply I could delve into it. It was just so thrilling to watch a show like that."

Danes: "So much of my job is about finding another job, and that's really boring. I got so, so lucky. To be in an interesting television show is just like a jackpot, because it goes and goes and goes. It's like tenure."

Danes: "I like reading novels because it provides insight into human behavior. I am really interested in feelings and think they are what define us as a species. When you really get it right in acting, it's an act of empathy. You feel less distant from others, and that is really exciting."

Danes: "Everybody shares the same emotions. We all go through similar struggles in life, and we go through the same phases."

Danes: "I'm very interested in intimacy - how people relate to each other, what the inherent limitations are of choosing to love someone, and how we are very limited in our efforts to escape our loneliness. I think there is a strong sense of loneliness in all the stories I've picked. They're full of people who feel a bit abandoned. I don't know why I am drawn to that, but I am."

Danes: "It's impossible to ever know somebody. ... We can't fully connect: As much as we struggle to and want to, it's not entirely possible."

Gaby Hoffmann: "She has Alice-in-Wonderland syndrome. You'll be in the middle of a conversation with her and ask a question and suddenly she'll remember she is supposed to be on a plane in an hour. She has no sense of time."

Vogue Magazine: "She often plays women who are a world unto themselves, lit up with their own imaginative fire."

Gaby Hoffmann: "Whatever is in front of her she finds fascinating. She's a very good talker, but she's an impeccable listener."

The New Yorker: "Around the age of eight, Danes, exasperated by a boy in her class, was spooked by the pleasure she got from her revenge fantasies about him. 'Can people read your thoughts?' she asked her mother. 'Your imagination is your own. You can do whatever you like with it,' Carla answered. The knowledge that 'you could be a good person and host lavishly violent acts in your imagination' was, Danes said, a kind of liberation. 'I was so happy,' she added."