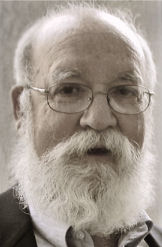 Quotes by and about Daniel Dennett

Dennett: "The eye contains a big flaw: The retina is inside-out. No designer would make such a clumsy arrangement, and this is just one of the hundreds of accidents frozen in evolutionary history that confirm the mindlessness of the process."

Dennett: "The Christians have been giving more and more ground: The Earth is no longer the center of the universe, and nor was it created in seven days. In 1000 years, the Christians will be claiming: 'It is the final proof of God's omnipotence, that he does not even have to exist!'"

Dennett: "[My colleagues in philosophy] want you to take [philosophy] seriously! I do take it very seriously, but not solemnly."

Julian Baggini: "His critics ... see him as a clever philosophical trickster."