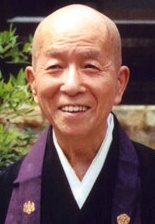 Quotes by and about Gudo Nishijima

Nishijima: "Some people seem to be naturally attracted to ... ideas, and I suppose I was one of them."

Nishijima: "It is very nice to be tolerant and open-minded, but, on the other hand, it is also important to think critically about what [others] say. We must sharpen our minds. We must look closely at the theories we encounter and ask ourselves what they really mean."

Nishijima: "For many people, [the] realm of the senses is reality itself. They scorn idle thinking and dreaming and seek the security of possessions and the pleasures of sensory experience." 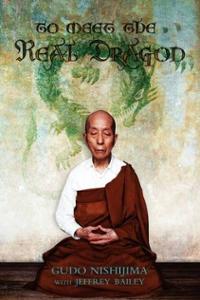 Nishijima: "Usually, when someone does something, there is some special motive behind it, some conscious or unconscious desire to get something in return for the effort involved."

Nishijima: "When we encounter viewpoints that are different from our own, we usually feel uneasy. Sometimes we laugh, sometimes we scoff, sometimes we become very angry. In every case we seem to cling to our own point of view. We try to protect ourselves from viewpoints which are alien to our own way of thinking. This is a problem for us - a rather big problem."

Nishijima: "Our thoughts ... build on each other, becoming ever more involved and complex. We formulate grand theories and create interesting stories involving those we love and hate. We often catch ourselves awakening from sweet reveries, wish-fulfilling daydreams or dramatic melodramas. It seems that our minds can create complete worlds: worlds of fantasy and illusion - worlds in which we can finally tell the boss what we really think of him. In the realm of thought, we can realize our fondest dreams. But of course, dreams are only dreams..."

Nishijima: "I feel that the West is looking for direction, searching for a unifying philosophy: a fundamental point of view on which to base its actions, its life. But how can such a wide and diverse civilization ever find a unifying philosophy? What single principle could accommodate the hopes and desires, the beliefs and habits of so many and varied nations? I think Buddhism could accomplish that task. I think Buddhism could be the unifying philosophy the people of the West are seeking. I think so because Buddhism is a philosophy that welcomes all points of view, studies them critically and then steps beyond them into reality - into the real world. If Western civilization could find Buddhism - if it could study Buddhism, absorb Buddhism and transform Buddhism according to the individual characters of its nations - then it would have its needed theory; it would have the unifying philosophy it needs to harness its energy, synthesize its diversity and grow into a truly great civilization. This is the hope I have for Euro-American civilization. This is the hope I have for us all."

Nishijima: "Dogen's dialectic about reality is rather like Hegel's."

Brad Warner: "The nice little Zen books on the shelves these days don't give you much of a sense of how truly grating Zen masters can be. They're the ultimate know-it-alls. And Nishijima may very well be the worst of the lot."

Brad Warner: "He seems to delight in throwing lines into his talks that are guaranteed to put everyone in the room on edge. The image of the gentle Zen master soothing his audience with tranquil words of serenity and peace is [not his style]. ... Nishijima's talks are never stilling - they're downright irritating."

Brad Warner: "No one I ever saw start an argument with him ever made it through the thing without being reduced to a sputtering fool."

Brad Warner: "I've never once seem [him] back down."