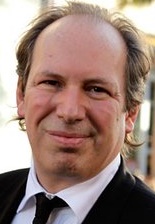 Quotes by and about Hans Zimmer

Zimmer: "[I] always try to challenge [my] process, because that's fun. You always want to try to invent a slightly new way of sneaking up on the beast - because it is a beast; it is a huge, big thing."

Zimmer: "Ideas are fragile when you first come up with them. It's so easy for people to put you off your track."

Zimmer: "[I want musicians] to show [me] the possibilities that [I] haven't thought of before. ... And the orchestra as well. ... [I will] have a bit of a chat with the bassoonist and go, 'I know there's a sound your instrument makes that probably nobody has ever heard before because nobody wants you to make that. Let's hear it!'"

[On why he is a film composer:]
Zimmer: "No one has told me to stop being experimental, and the laboratory doors are wide open. ... [My scores] couldn't be more different in style. That's why I got into film music. ... If you were in a band, you have a sound and everybody expects you to have that down for the rest of your life. I couldn't do that. What if I wanted to do psychedelic, country and western, heavy metal? Nobody would let me. Film lets you tell a story."

Zimmer: "The whole process of working with a director, talking about story, all these half-finished things which inspire a different direction - I mean, Interstellar is a good example in that none of the pieces in Interstellar actually have a last chord, because there was always - they'd get to a certain stage of ideas and execution, and Chris [Nolan] and I would be talking, and we'd get another idea - 'Oh, let's try this, let's go over here' - so it's that - it's process. Process is the greatest thing!"

Zimmer: "There's the old joke: 'Mummy, mummy, when I grow up, I want to become a musician,' and Mother goes, 'Oh, sweetheart, you can't do both!' I think I've very much lived that. I don't see [what I do] as work."

Zimmer: "It's such a strange life being a film composer because you are not living in reality at all. You are forever in that dream world that a movie is. My grasp of everyday reality is actually very bad."

Zimmer: "One of the reasons I needed to leave [my old] band and get into film was because if you're in a band, the best conversation you're ever going to have is probably about what new guitar the guitarist is going to buy or whatever. When you're working with filmmakers ... you are suddenly being introduced to paintings. You are suddenly being introduced to literature that you hadn't read."

[On his preferred process in working with directors:]
Zimmer: "I like it being collaborative. It goes the other way around as well. There comes a certain point in every single movie that Chris [Nolan] and I have done together where we somehow reverse the conversation, where he's talking more about the music and I'm talking more about the story. We've taken on each other's roles in a funny way. We're questioning each other constantly. Sometimes [directors] get out of the way and I like that less."

Zimmer: "One of my favorite moments [of working on 'Hannibal'] and why I love doing what I do is when Ridley had come back from the shoot - again, somehow these things work best Sunday nights - so like 11 o'clock at night we're in the cutting room and there's a frame on the screen of a tear running down Clarice's cheek, and I'm saying, 'Well, she's in love with him!' and Ridley's going, 'No no no no, it's a tear of disgust!' and Pietro Scalia - I can't remember, but he was saying something else - and it started to become this very heated argument - so much so that we're sort of standing and we're like shouting at each other - you know, 'No no no, it's this!' And I had one of those weird out-of-body, the-camera-pulls-back moments, and I'm thinking, 'Wow! What a great life - three grown men arguing about the meaning of a tear on a woman's face.' It was great. Yes, I want to be in that life. I want to be in that company - you know, people being passionate about things."

Zimmer: "I just love the adventure of [what I do]. Chris [Nolan] gave me this watch and on the back it says, 'This is no time for caution.' And I think that's how I lived my life. That's how we made that movie, and that's how I want to approach everything. It's an adventure. It's a journey. And it's just fantastic to be part of it. ... I always had this rule: Every morning when I wake up, I ask myself, 'Do I want to go to the studio and make music?' And all the directors I work with know that the day I go, 'Don't want to do it anymore,' I will stop. But every morning it's the same thing. I wake up with an idea, I wake up with a sound, I wake up with a possibility to play with somebody. You know, Sunday at the Grammys, being surrounded by all these musicians, running into all these musicians, seeing Herbie Hancock and going, 'Hey, we've never done anything together, let's go and do something!' So my future already, of just that one day of seeing, hanging out with all these talented people, making plans of the great unwritten, unimprovised, unperformed whatever it is - how can you say no? It's an extraordinary great life that I'm living."

Zimmer: "When I was six, my mother said she knew I loved music, and she knew I was making a noise on the piano. She said, 'Do you want a piano teacher?' To me, what that question meant was [if I wanted] somebody who could help me figure out how to get that stuff that was going on in my head into my fingers. Instead it was somebody who made me play other people's music, and [do] exercises, and I didn't wanna play other people's music. So, plus I think I was born with a healthy disdain of authority, which is not a good thing if you're in Germany. ... The honest truth is that it was just traumatizing with the piano, with the authority of the piano teacher, getting rapped across the knuckles, and so whenever you put a piece of music in front of me, there's a Pavlovian reaction where it starts off. The eyes go weird, right?"

Andrew Trendell: "In the short course of our conversation, I can't help but feel my spirit lifted. ... [He is] restlessly creative, pumped at every turn by his lust for life. His laughter is rousing, and his energy is infectious."