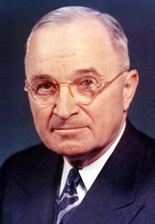 Quotes by and about Harry S. Truman

Truman: "My choice early in life was either to be a piano player in a whorehouse or a politician. And to tell the truth, there's hardly any difference."

Truman: "Leaving the White House involves no problem of adjustment if you were a common citizen before. But how many Presidents can you name who [like me] were common citizens before?"

[Diary entry as President:]
Truman: "Was sitting at my desk just before dinner tonight when [a White House employee] came up and asked if he might speak to me. He was scared stiff and almost crying. Said he'd got his checks mixed up, had lied to the Secret Service and he wanted to tell me before his boss did. As usual I felt sorry for him and promised to help him out."

[Diary entry as President:]
Truman: "I wonder why nearly everyone makes a father confessor out of me. I must look benevolent or else I'm a known easy mark. Well, any way I like people and like to help 'em and keep 'em out of trouble when I can and help 'em out when they get into it."

Truman: "I don't believe in anti-anything. ... You have to be for something, otherwise you will never get anywhere."

Truman: "I have found the best way to give advice to your children is to find out what they want and then advise them to do it."

Truman: "I fired [General Douglas MacArthur] because he wouldn't respect the authority of the president. ... I didn't fire him because he was a dumb son of a bitch, although he was, but that's not against the law for generals."

[In a letter to a reviewer who was critical of his daughter's singing:]
Truman: "Some day I hope to meet you. When that happens you'll need a new nose, a lot of beefsteak for black eyes, and perhaps a supporter below!"

Truman: "Lady Astor [said] to me that she liked my policies as President but that she thought I had become rather too much 'Yankee.' I couldn't help telling her that my purported 'Yankee' tendencies were not half so bad as her ultra-conservative British leanings. She almost had a stroke."

[Diary entry as President:]
Truman: "Met forty or fifty patients most of whom were war wounded. They were happy and optimistic. Makes a person ashamed to be gloomy even if world affairs are mixed up."

Steven J. Rubenzer: "[Inside Truman] a 'tough son-of-a-bitch' of a man shared space [with] a sensitive boy."