Quotes by and about J.R.R. Tolkien

Tolkien: "I am cursed by acute sensibility."

Tolkien: "I have always been seeking ... things of a certain tone and air, and not simple knowledge."

Tolkien: "Spiritual principles [are] corrupted by the attempt to mechanize and formalize them."

Tolkien: "I have ... a burning private grudge ... against that ruddy little ignoramus Adolf Hitler (for the odd thing about demonic inspiration and impetus is that it in no way enhances the purely intellectual stature: it chiefly affects the mere will)." 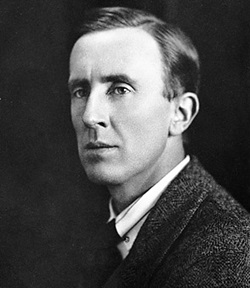 Tolkien: "I was from early days grieved by the poverty of my own beloved country: it had no stories of its own ... not of the quality that I sought, and found (as an ingredient) in legends of other lands. ... I had a mind to make a body of more or less connected legend, ranging from the large and cosmogenic, to the level of romantic fairy-story ... which I could dedicate simply: to England; to my country."

Steven Hart: "C.S. Lewis recognized [in Tolkien] a man who could spend long years grinding away at a single story, but who also had his own voice and used many of the pagan source materials Lewis loved."