Quotes by and about Jamie Hyneman

Hyneman: "[On our show] we are promoting by example ethical behavior."

Hyneman: "I do wish we had more time to explain and explore the science in these stories we take on. Television and ratings seem to require that we keep things to a relatively shallow level, which I find frustrating. There is a lot of depth in some of the things we explore which I wish we could put out there."

[On taking risks on the show:]
Hyneman: "I do what I have to do; it's my job. Often the things we do are risky, and I have to say I have gotten quite used to that being the case. For my own safety and that of others on the team I try to remain as flat calm as possible to make sure I don't miss something that would end up with someone getting hurt."

Hyneman: "The main driving point to do what I do is that it is a job. I don't mean to say it's a drag at all, but I like to keep that first and foremost because this environment puts us in the public eye, and it is easy to lose perspective, given all the attention we get. It's like we're special or something. We're not."

Hyneman: "We use explosives and weapons with a certain amount of glee on the show, and I am concerned that we may seem to be glorifying them. ... [We] don't in any way want to seem like we are encouraging irresponsible use of them. ... Just because we use them on the show does not mean we are cavalier about such things." 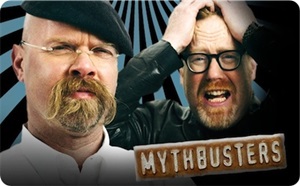 Hyneman: "[When I was offered a television show] I didn't figure I could carry the show by myself, so I thought of who I knew who was quite a bit more of a ham than I am but also still pretty good at doing the work, and that was [Adam Savage]."

Hyneman: "I am less impulsive than Adam."

Adam Savage: "There's a certain bizarre chemistry between Jamie and I."

Adam Savage: "My method is more to try everything I'm thinking as fast as possible, and I'm really fast, so I can usually build something three or four times in the same period of time it takes Jamie to build it once. ... Which makes it excruciating for me to watch him build. I'm like, 'Why are you taking so much time?! Just do it! Just drill there!' And then he's thinking, 'Why are you wasting so many materials doing this three or four times?! Just think about it!'"