Quotes by and about Jerry Falwell

Falwell: "I am convinced that America can be turned around if we will all get serious about the Lord's business."

Falwell: "I believe that America was built on integrity, on faith in God, and on hard work. I do not believe that anyone has ever been successful in life without being willing to add that last ingredient - diligence or hard work." 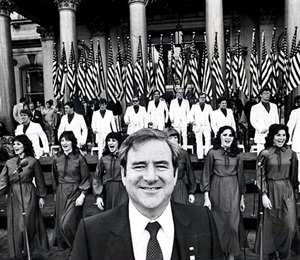 Falwell: "I remember the time when it was positive to be patriotic, and as far as I am concerned, it still is."

Falwell: "Good people in America must exert an influence and provide a conscience and climate of morality in which it is difficult to go wrong."

Falwell: "Parents should ... keep their children following the rules. ... Sometimes it isn't pleasant. ... The heavenly Father loves everyone, but because he loves you, when you do wrong, he'll give you a paddling."

Falwell: "[I] have learned how to converse with the public, not yell at them."