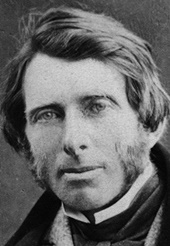 Quotes by and about John Ruskin

Ruskin: "Though I often hear ... people complaining of the bad effects of want of thought ... one of the worst diseases to which the human creature is liable is its disease of thinking. If [one] would only just look at a thing instead of thinking what it must be ... we should all get on far better."

Ruskin: "When we are tired of one bad cheap thing, we throw it aside and buy another bad cheap thing; and so keep looking at bad things all our lives. Now, the very men who do all that quick bad work for us are capable of doing perfect work. Only, perfect work can't be hurried, and therefore it can't be cheap beyond a certain point. But suppose you pay twelve times as much as you do now, and you have one woodcut for a shilling instead of twelve; and the one woodcut for a shilling is as good as art can be, so that you will never tire of looking at it; and is struck on good paper with good ink, so that you will never wear it out by handling it; while you are sick of your penny-each cuts by the end of the week, and have torn them mostly in half too. Isn't your shilling's worth the best bargain?"

Ruskin: "Every noble youth looks back, as to the chiefest joy which this world's honour ever gave him, to the moment when first he saw his father's eyes flash with pride, and his mother turn away her head lest he should take her tears for tears of sorrow. Even the lover's joy, when some worthiness of his is acknowledged before his mistress, is not so great as that, for it is not so pure - the desire to exalt himself in her eyes mixes with that of giving her delight; but he does not need to exalt himself in his parents' eyes: it is with the pure hope of giving them pleasure that he comes to tell them what he has done, or what has been said of him; and therefore he has a purer pleasure of his own."

On How To Give Criticism

Ruskin: "[Consider carefully] the kind of criticism with which you ... receive the works of the young men submitted to you. You may do much harm by indiscreet praise and by indiscreet blame; but remember, the chief harm is always done by blame. It stands to reason that a young man's work cannot be perfect. It must be more or less ignorant; it must be more or less feeble; it is likely that it may be more or less experimental, and if experimental, here and there mistaken. If, therefore, you allow yourself to launch out into sudden barking at the first faults you see, the probability is that you are abusing the youth for some defect naturally and inevitably belonging to that stage of his progress; and that you might just as rationally find fault with a child for not being as prudent as a privy counsellor, or with a kitten for not being as grave as a cat."

Ruskin: "But there is one fault which you may be quite sure is unnecessary, and therefore a real and blameable fault: that is haste, involving negligence. Whenever you see that a young man's work is either bold or slovenly, then you may attack it firmly; sure of being right. If his work is bold, it is insolent; repress his insolence: if it is slovenly, it is indolent; spur his indolence. So long as he works in that dashing or impetuous way, the best hope for him is in your contempt: and it is only by the fact of his seeming not to seek your approbation that you may conjecture he deserves it."

Ruskin: "It is the practical duty of a wise nation, first to withdraw, as far as may be, its youth from destructive influences - then to try its material as far as possible, and to lose the use of none that is good. I do not mean by 'withdrawing from destructive influences' the keeping of youths out of trials; but the keeping them out of the way of things purely and absolutely mischievous. I do not mean that we should shade our green corn in all heat, and shelter it in all frost, but only that we should dyke out the inundation from it, and drive the fowls away from it. Let your youth labor and suffer; but do not let it starve, nor steal, nor blaspheme."

Ruskin: "The greatest minds are marked by nothing more distinctly than an inconceivable humility, and acceptance of work or instruction in any form, and from any quarter. They will learn from everybody, and do anything that anybody asks of them, so long as it involves only toil, or what other men would think degradation. But the point of quarrel, nevertheless, assuredly rises some day between the public and them, respecting some matter, not of humiliation, but of Fact. Your great man always at last comes to see something the public don't see. This something he will assuredly persist in asserting, whether with tongue or pencil, to be as he sees it, not as they see it; and all the world in a heap on the other side will not get him to say otherwise. Then, if the world objects to the saying, he may happen to get stoned or burnt for it, but that does not in the least matter to him; if the world has no particular objection to the saying, he may get leave to mutter it to himself till he dies, and be merely taken for an idiot; that also does not matter to him - mutter it he will, according to what he perceives to be fact, and not at all according to the roaring of the walls of Red sea on the right hand or left of him. Hence the quarrel, sure at some time or other to be started between the public and him; while your mean man, though he will spit and scratch spiritedly at the public, while it does not attend to him, will bow to it for its clap in any direction, and say anything when he has got its ear, which he thinks will bring him another clap; and thus, as stated in the text, he and it go on smoothly together. There are, however, times when the obstinacy of the mean man looks very like the obstinacy of the great one; but if you look closely into the matter, you will always see that the obstinacy of the first is in the pronunciation of 'I;' and of the second, in the pronunciation of 'It.'"

Raymond E. Fitch: "Before all other things John Ruskin was the great Victorian prophet of what we would now call the apparent deterioration of life. Stylist, aesthete, economist, moralist, glaciologist, naturalist, or nympholept he may also have been, but the compulsive current of his many works is his rising nausea at the prospect of a global slum, a depleted planet. ... [He has a] recurrent sense that chaos is coming again, that our culture has been blighted, that the world's body has been infected by its mind ... [and by] life's struggle with wealth."

P.D. Anthony: "Ruskin suggested that putting muscles to work might be better than putting them to play and that not putting them to work was unnatural. Work provided a necessary accompaniment to learning, a relief from it and a balance in it. It also contributed discipline to lives that would otherwise come to be self-indulgent because those engaged in intellectual education would be, by selection if not by definition, predisposed to find intellectual work entirely enjoyable. ... Ruskin's innate puritanical asceticism made him suspicious of purely (or merely) intellectual activity. [As he saw it] what passed for intellectual work was often sheer amusement."

Leo Tolstoy: "Ruskin was one of the most remarkable of men, not only of England and our time, but of all countries and all times. He was one of those rare men who think with their hearts, and so he thought and said not only what he himself had seen and felt, but what everyone will think and say in the future."