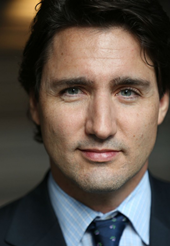 Quotes by and about Justin Trudeau

Trudeau: "I have a deep sense of understanding that there is a responsibility that we all share to try and contribute to the world around us in whatever way we can."

Trudeau: "Politics is supposed to be how we come together as a society, as a community, to figure out the best way to move forward. That's what it's supposed to be."

Trudeau: "There's always, in any productive organization, a tension between change and the status quo. You need a certain level of stability and reassurance, but you need disruptive elements and fresh thinking to renew and to not get calcified or stagnate."

Trudeau: "[I try] come at [politics] with a fresh approach that is much more keeping with our generation, which is collaborative, respectful of each other, thinking about long term, not just short term outcomes, and looking for individual empowerment as well."

[Interviewer: "What drives you?"]
Trudeau: "Whatever the opposite of fear is. Hope, positivity, a sense of responsibility."

[Interviewer: "I'm sure it's not easy having a Trudeau last name. It's hasn't all been a bed of roses."]
Trudeau: "No. But nobody's life is a bed of roses. And regardless of how the situation is, you go through ups and downs, and they end up defining you."

[On his leadership style:]
Trudeau: "Helicopter leadership ... was an image that struck me deeply. And it's not like helicopter parenting, where you're hovering around. A helicopter commander sits above the battlefield, at a few thousand feet, and can see the entirety of the battle field. If he spots a problem, he will drop down, get out of the helicopter, deal with that problem, talk to the officers in place, have them fix it, and then withdraw right again so he's back to seeing the big picture. For me, being able to engage with the details when necessary, when there's a challenge, when there's a particularly important pivot, yes, you have to do that. But in general, a leader needs to trust their commanders, needs to trust the team they've assembled, to actually execute in the right way."

Trudeau: "When you ask, 'What is that exchange in The House of Commons in service of?' most of the time it'll be, 'Well they're both trying to score political points for their party.' That's not what politics is supposed to be about. That's why people are so cynical. It's supposed to be about, 'Are we getting to the best answer for Canadians? Are we getting to the best policy, the best solutions that are going to fix problem A, B, or C?' and that is not the intent of so much communication in The House of Commons. No wonder people choose to unplug, because we're just shouting louder and louder to try and look good rather than actually say how we're going to roll up our sleeves and fix this piece of legislation."

Trudeau: "I'm very good at sticking to and executing a plan."

Trudeau: "I'm someone who is, I think, a learned extrovert. ... I'm perfectly happy to be quiet the way my father was. But I do like people, and I've gotten over an innate shyness that, you know, has led me to be fairly good at this particular line of work."

The Globe and Mail: "In person he is ... fluidly intelligent, highly articulate, compassionate ... idealistic [and] likeable."

New York Times: "In person, Trudeau [is] as upbeat and friendly - as nice - as might be expected of a politician with a campaign mantra of 'Sunny Ways.'"

New York Times: "Travel has ... given him compassion for the less fortunate around the globe. In his memoir, 'Common Ground,' Trudeau described a moment from a boyhood trip to Bangladesh, recollecting it in the kind of mawkish language his opponents ridicule but that is plainly heartfelt. On state business with his father in Dhaka, the younger Trudeau saw a poor old man with a bicycle wait patiently while their motorcade swept by. He was suddenly seized with empathy for the man, realizing that there were billions of people on earth, each a unique individual, each with a story. 'I have never looked at my life and my circumstances in quite the same way since,' he wrote."

New York Times: "The death of Pierre Trudeau in 2000 marked the beginning of Justin Trudeau's public life. As the eldest son, then 29, he was asked to give the final eulogy for one of the towering figures in Canada's history. The state funeral in Montreal for the older Trudeau remains one of the most significant events in Canadian television history, and Justin was the unquestioned star, delivering an emotional remembrance with the touch of a natural orator. 'Je t'aime, Papa,' he said, laying his head on the coffin in an instantly iconic gesture of national grief."

New York Times: "Justin Trudeau entered politics eight years [after his father's death in 2000]. Trudeau distinguished himself with hard work and an appetite for retail politics; Trudeau's father never loved pressing the flesh, but his son's greatest talent might well be his common touch."

Financial Times: "[He] set himself apart in [the 2015] election race as the more passionate, personable candidate."

The Globe and Mail: "Lots of politicians have energy, born from the depths of their longing to be needed. But Mr. Trudeau's energy is some kind of mutant surge. One morning ... I watched him meet 40 people in 10 minutes. ... He took their hands in his two hands and looked directly into their eyes and smiled and listened, at least for the time he could give them. Of all the people he made contact with that I spoke to afterward, only one claimed to find his attention insincere. He moved through a crowd like someone doing an easy crawl through lake water."

The Globe and Mail: "The next morning at the Edmonton Pride parade, Mr. Trudeau ran - literally ran - back and forth across the street for 90 minutes, high-fiving, double-high-fiving, shaking hands, hugging, mugging, dancing, shouting, never stopping. He must have been asked for 500 selfies with the people he met. He snaps them himself, the same picture every time, the same frame of himself and the voter, the same smile, the same number of his teeth showing. ... He seemed to be in a trance of pure connection. Unlike many other politicians, who will not shake hands unless they know the shaker is a fan, he never hesitated, never backed away; everyone was the same to him."

The Globe and Mail: "[Someone] asked Trudeau, 'What's Canada's biggest problem at the moment?' 'Sorting out who we are,' Justin said. 'And finding that balance between safety and freedom. ... And getting over the cynicism of the political system.'"

The Globe and Mail: "Away from the crowd, he's more introverted, quieter, a reader: 'I can be up, and I can be down. But if I'm going to do downtime, I have to do downtime.' He has impeccable manners, and dislikes being rude."

The Globe and Mail: "[He has a] love ... of emotion over logic as a means of reaching people."

New York Times: "He [knows] perfectly well the power of symbols and [intends] to exploit that power."

Financial Times: "On his left shoulder, there is a tattoo of the planet Earth inside a Haida raven (in the mythology of Canada's indigenous Haida people, the national history museum explains, the bird is 'a trickster who liberates humankind from a clamshell')."