Quotes by and about Karl Lagerfeld

Lagerfeld: "I never prepare anything. What I say is all improvised. I'm a totally improvised person."

Lagerfeld: "I don't want to do anything over again, ever again. I want only to do what I haven't done." 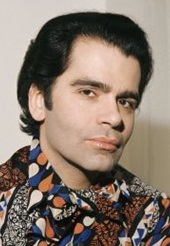 [Responding to accusations that it is unethical to use fur in fashion:]
Lagerfeld: "[The animals] would kill us if they could. ... In a meat-eating world, wearing leather for shoes and clothes and even handbags, the discussion of fur is childish."

[Defending the use of size zero models:]
Lagerfeld: "There are less than one percent of people who are too skinny. There are nearly 30 percent ... who are too fat. So let's take care of the zillions of the too fat before we talk about the percentage that's left."

Lagerfeld: "It's better to be too thin than too fat."

Lagerfeld: "Sweatpants are a sign of defeat. You lost control of your life, so you bought some sweatpants."

Lagerfeld: "I hate the word routine. What I hate most is when you have to look at your watch and get in a hurry to change for dinner. Every dinner is important; you should never be without a dinner, but this I'm a little tired of. I did a lot of it in my life."

Lagerfeld: "If someone gives me a to-do list [full of menial chores] I say, 'Thank you, this is nice, one needs something to throw in the wastebasket.'"

Lagerfeld: "I hate ... conversation with intellectuals because I only care about my opinion."

Lagerfeld: "I'm very much down to earth, just not this earth." 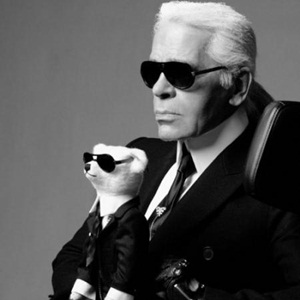 [Asked why he always wears sunglasses:]
Lagerfeld: "They're my burqa. ... I'm a little short-sighted, and ... when ... short-sighted [people] remove their glasses then they look like cute little dogs who want to be adopted."

[Asked again about his sunglasses:]
Lagerfeld: "I had an interview once with some German journalist. Some horrible, ugly woman. It was in the early days after the communists, maybe a week after, and she wore a yellow sweater that was kind of see-through. She had huge tits and a huge black bra, and she said to me, it's impolite, remove your glasses. I said, do I ask you to remove your bra?"

[Asked about the Middleton sisters:]
Lagerfeld: "Kate Middleton has a nice silhouette. I like that kind of woman, I like romantic beauties. On the other hand, the sister struggles. I don't like the sister's face. She should only show her back."