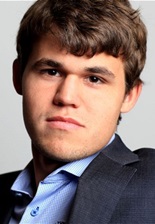 Quotes by and about Magnus Carlsen

Carlsen: "[I see chess as] combat. I am trying to beat the guy sitting across from me and trying to choose the moves that are most unpleasant for him and his style. Of course some really beautiful games feel like they are art, but that's not my goal."

Carlsen: "Self-confidence is very important. If you don't think you can win, you will take cowardly decisions in the crucial moments, out of sheer respect for your opponent. ... It is better to overestimate your prospects than underestimate them."

Carlsen: "I don't think there is a thing like overconfidence in chess. It's always better to be too confident than too reluctant."

Carlsen: "[I don't play against computers because] I really enjoy the experience of playing humans. The psychological game is so much more important. I try to put pressure on other players, both at the board and psychological pressure by playing quickly and confidently."

Carlsen: "I have a very childish sense of humor; I will do a prank and my friends will shake their heads."

Carlsen: "I really don't like it when I go out and some girls start talking to me about how they played chess with their grandfather as a kid, I can't stand that. It's boring. I want to talk about whatever else."

Carlsen: "I'm not ... disciplined. Organization is not my thing; I am chaotic and tend to be lazy."

Carlsen: "I don't enjoy working to a timetable. Systematic learning would kill me."

Financial Times: "He describes himself on his Facebook page simply as 'Athlete'. Is that really how he sees being a chess player? 'I think that is the best way to describe it. The way I prepare for tournaments, the way I conduct myself during tournaments, it is very much the same way athletes prepare and also the ultimate goal is to win.'" 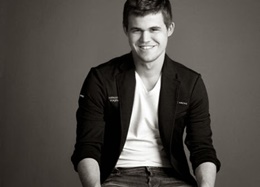 [Interviewer: "Sometimes chess is criticized as a waste of time and energy. Have you ever come across such criticism, and what do you think about it?"]
Carlsen: "Sometimes I hear that, and then I always agree with them."

Financial Times: "Carlsen is seen by many as a blessing for a game that has long been associated with, well, nerds."

Vice Magazine: "He [is] charismatic but not arrogant, elegant but deadly. ... On top of this, he [is] cool; he [doesn't] shy away from media, and he [has] the cheeky smile of a young superstar athlete."

The Guardian: "Unusually for a chess player he makes more than £1m a year in sponsorship, and he doesn't seem to mind performing stunts as part of his contractual obligations, such as the blindfold simultaneous games [with 10 players]. In fact, he seems to enjoy doing them and says he wants to take on 20 players next time."

The New Yorker: "He was the sort of child who studied what interested him and ignored what didn't."

The Telegraph: "He doesn't seem an excitable person generally. Quite unemotional, in fact. ... He's an inscrutable young man."

The Telegraph: "'My parents are living [with me in my house] at the moment,' Magnus says in a resonant voice, laced with a faint Norwegian accent. 'When they least expect it, I will throw them out on the streets.' He gives a slow-burn, lopsided smile, to show he is joking."