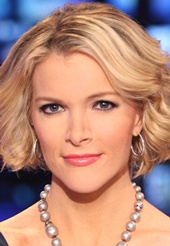 Quotes by and about Megyn Kelly

Kelly: "Some in this country have been so busy trying to figure out how to avoid causing ... offense they have forgotten ... [that] in America we stand for liberty and freedom to offend, to provoke ... and to defy."

[On the David Petraeus scandal:]
Kelly: "This guy saved thousands of American lives running a successful surge in Iraq, and there's something discomfiting about booting him out over a personal indiscretion. But I understand the other argument, which is that when you're in a position like the one he had, you have to give up certain things. It's like Princess Kate: You want to be queen? You can't take off your top and sunbathe. Life's a trade-off."

Kelly: "By the end I just hated [practicing law]. I loved arguing in front of a jury, but there's so much paper pushing. I realized I had done nothing fun in my 20s, just toiled away. I resolved I wouldn't spend my 30s the same way."

Kelly: "[I went into journalism because] I thought the profession had some nobility in it, but it's also one in which you have to get your hands dirty. ... I didn't want anything that was too highbrow or elite. My dad was a college professor, and he constantly had the Ph.D. students over for these great esoteric discussions. But I wanted to be with the people, not just with the Ph.D.'s."

Variety Magazine: "Kelly's tough approach to questioning often makes her sound less like a newscaster and more like her ... idol, Judith 'Judge Judy' Sheindlin, a style that's won her many fans."

Brit Hume: "[She speaks] with a fierce authority."

Michael Clemente: "She is bright and knows how to ask the right questions in a polite but aggressive way."

New York Times: "[Her former law partners wanted] to see if she could handle the firm's macho culture. She could."

Washington Post: "[In law] she [was] a hard-working superstar, allowing her soul to be crushed by the grind even as it hardened her backbone to steel."

Alan Dershowitz: "[Her position] is the paradigm for how Americans have to look at [their] freedoms."