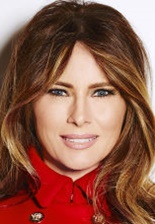 Quotes by and about Melania Trump

Trump: "Nobody controls me."

[Asked about being enemies of the Clintons after they had once been friendly:]
Trump: "It's all business now; it's nothing personal."

Trump: "I am not a 'yes' person. No matter who you are married to, you still need to lead your [own] life."

Trump: "You cannot change a person. ... Let them be the way they are."

Trump: "Give [your] child room to make mistakes ... so later in life they can go on their own. Let them fall once in awhile. ... Don't try to change their opinion."

Trump: "To marry a man like Donald, you need to know who you are ... and you need to be very strong and smart."

Trump: "We are both very independent."

GQ Magazine: "She lets [her husband] have his space; she's not 'needy' or 'nagging.'"

Mickey Rapkin: "In what ways have you been misrepresented, I ask. 'That I'm shy,' she says. 'I'm not shy. I know what I want, and I'm selective.'"

Mickey Rapkin: "The modeling industry is a notorious minefield for young women. When asked if she'd ever been propositioned by a photographer or agent, she doesn't hesitate, saying, 'Yes. You need to be a strong person. For me, it was no way. The agents, they invite you, ‘Oh, let's go for a weekend here or there.' Some girls go for it. I knew exactly how the industry worked. I never went into that. I know when they go to parties, there are drugs, there's alcohol. It doesn't bring you anywhere. I always stayed true to myself.'"

GQ: "Melania dabbles in design. ... When she was getting her jewelry plans off the ground, Melania sketched the designs for the collection herself. ... '[Her designs are] not free; [they're] precise,' ... one of Melania's ... classmates, says of her art. 'She has a really good feeling for this.'"

GQ: "[The night Donald and Melania met, Donald] arrived with a date but was immediately taken with Melania. He sent his companion to the bathroom so he could have a few minutes to chat up the model he'd noticed. But Melania knew of Trump's reputation - which was immediately confirmed by the fact that he had come to the party with a date and was now asking for her number. She refused, and instead asked Trump for his contact information. Unimpressed with merely catching the eye of the famous billionaire, Melania was studying the situation as if testing a coin with her teeth. 'If I give him my number, I'm just one of the women he calls,' she remembers. Melania was curious to see if he'd proffer a business number. 'I wanted to see what his intention is,' she explains. 'It tells you a lot from the man what kind of number he gives you. He gave me all of his numbers.' Perhaps Trump saw something worth admiring in Melania's willingness to walk away from the deal. Indeed, she waited a week before calling him. 'I'm not starstruck,' she explains. 'We had a great connection, we had great chemistry, but I was not starstruck. And maybe he noticed that.'"