Quotes by and about Michelle Malkin

Malkin: "I am always a happy warrior in the mold of Ronald Reagan."

Malkin: "I was a 'congenital conservative' from the time I was a young girl, and that's because of my parents. ... I had never been exposed to progressive ideas of multiculturalism and collectivism the way I was in college. And it was against everything I had been taught and everything that I believed instinctively."

Malkin: "Barack Obama owns this cabinet of tax cheats, crooks, and cronies. It is his and his alone. In the era of 'new politics,' judge him as you would judge other mere mortals. ... Judge him by the company he keeps."

Malkin: "Ann Coulter is provocative, and she's not afraid to say things - true things - she knows will generate a media backlash. ... Coulter's detractors don't realize the more they try to shut her down, the more people are exposed to her point of view, and that's what they don't want." 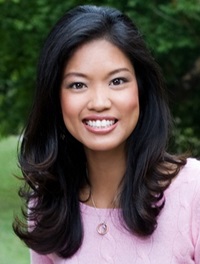 [Responding to freeze-frame shots of her 'wide-eyed zealot' TV appearances:]
Malkin: "I'd rather have 'crazy eyes' than willfully blind ones. Also: 'Crazy eyes' are useful for doing the Mom Death Stare on unruly kids. Invaluable weapon."

Malkin: "As the daughter of legal immigrants from the Philippines, I have never taken for granted the rights and responsibilities that come with citizenship."

Malkin: "I am sick and tired of watching our government allow illegal line-jumpers, killers, and America-haters to flood our gates and threaten our safety."

Malkin: "Once an unabashedly pious land, we have been transformed into a nation of historically clueless ingrates - embarrassed about our heritage, afraid of offending all newcomers, and more committed to inculcating a sense of entitlement over a culture of gratitude."

Malkin: "I believed naturalized Americans and their families - such as my own - can play a leading role in the movement to defend and reclaim our borders from aliens who despise our sacred institutions. It is our sworn duty and obligation."

Malkin: "When it comes to speaking and writing on unpleasant matters, I learned a long time ago to stop apologizing. It is a waste of my breath, time, and energy to precede every political discussion with 'I'm not saying all [X] are [Y].' Or: 'Of course, I don't hate all [Z] and please don't misunderstand me, blah, blah, blah.' Liberal guilt is a defect I don't suffer. ... Because of this unwillingness to preface my arguments with Kleenex-wetting clauses, I am invariably accused of being motivated first and solely by hatred, bigotry, racism, sexism, whatever-ism."