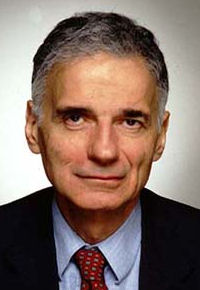 Quotes by and about Ralph Nader

Nader: "I used to hitchhike a lot, all over the country. At the time I never met anybody who hitchhiked more."

Nader: "Many institutions in our country which we look at benignly as doing good, are avoiding controversy. When you avoid controversy, you are avoiding some pretty bad injustices and you become bland. You become goody two-shoes types."

[Asked how he stands up to his critics:]
Nader: "You can't have a thin skin. You've got to realize that you are going to have to take what you give out. Sometimes you are going to take a lot of unfair criticism, criticism designed to destabilize the credibility you have on a certain issue, but there is a certain robust pleasure in that. If you have the right attitude, you won't be so demoralized."

Nader: "It is a discovery of human happiness to go into this society of ours and grapple with problems and come out looking back and saying, 'Well, the life of a lot of people is better because of what I did.' If people will look at citizen action as a source of joy, I think they are more likely to go into it."

[Asked what he would say to a young person seeking his advice on following in his footsteps:]
Nader: "I'd ask them what's their passion in terms of justice. They usually have one or two areas that really affect their sense of their mission, what they are all about."

Nader: "[As a child] I was very interested in books that detailed injustice, and how people who are underdogs were mistreated, throughout history, whether they were peasants, or workers in the industrial plants a hundred years ago. And these books exposed the brutality or injustice or unfairness that powerful political and business and other interests dealt out to workers and [child laborers]."

Nader: "I grew up thinking one person can change things. ... If you grow up in a mass society and think that nothing can be done unless you have masses of people who all agree all at once to start doing something, then you are not going to count yourself as very significant. [And] I don't believe in trivializing myself."