Quotes by and about Sam Walton

Walton: "[I'm] not ashamed of having money, but I just don't believe a big showy lifestyle is appropriate for anywhere, least of all here in Bentonville where folks work hard for their money and where we all know that everyone puts on their trousers one leg at a time."

Walton: "I learned early on that one of the secrets to campus leadership was the simplest thing of all: Speak to people coming down the sidewalk before they speak to you. I did that in college. ... I would always look ahead and speak to the person coming toward me. If I knew them, I would call them by name, but even if I didn't I would still speak to them. Before long, I probably knew more students than anybody in the university, and they recognized me and considered me their friend."

Walton: "I wasn't what you'd call a gifted student, but I worked really hard."

Walton: "[My dad] was the best negotiator I ever ran into. [He] had that unusual instinct to know how far he could go with someone - and did it in a way that he and the guy always parted friends - but he would embarrass me with some of the offers he would make, they were so low. That's one reason I'm probably not the best negotiator in the world; I lack the ability to squeeze that last dollar." 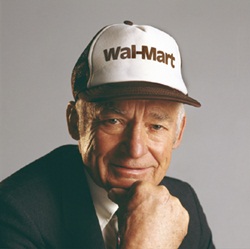 Walton: "A lot of what goes on these days with high-flying companies and these overpaid CEOs, who're really just looting from the top and aren't watching out for anybody but themselves, really upsets me. It's one of the main things wrong with American business today."

College newspaper: "Sam is one of those ... people who knows every janitor by name, passes plates in church [and] loves to join organizations."