Quotes by and about Scott Adams

Adams: "I see the world as a massively absurd endeavor, populated by people who struggle every minute to rationalize the silly things they do."

Adams: "The world isn't fair, but as long as it's tilting in my direction I find that there's a natural cap to my righteous indignation."

Adams: "Years later, when 'Dilbert' was in thousands of newspapers, people often asked me if I ever imagined being so lucky. I usually said no, because that's the answer people expected. The truth is that I imagined every bit of good fortune that has come my way." 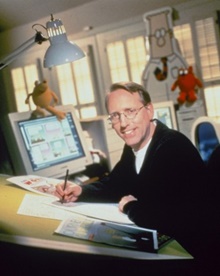 Adams: "When I was six years old ... I declared to my parents that one day I would be a famous cartoonist."

Adams: "[Becoming a famous cartoonist] was an unlikely dream, given my complete lack of artistic talent."

Adams: "I'm a perfect example of the power of leveraging multiple mediocre skills. I'm a rich and famous cartoonist who doesn't draw well."

Adams: "Some skills are more important than others. ... Acquire as many of those key skills as possible."

Adams: "Many dolts will try to impede your brilliant plans. ... Minimize their collective resistance."

Adams: "[As an entry-level employee] I wrote a letter to the senior vice president for the branch system, who was probably seven or eight layers of management above me, and described all of my naive suggestions for improving the bank."

Adams: "You can't accommodate a hundred different opinions. ... All you can do is provide people with the illusion that they participated in the decision."

Adams: "My mind [is] a conversation between two individuals. ... One ... tends to be rational and reasonable, while the other me is a bit more emotional and instinctual."

Adams: "I find it useful to daydream [about] the future. ... Simply imagining a better future hacks your brain chemistry. ... Your imagination can influence the real world. ... Let your imagination be the user interface to steer your reality."

Adams: "My life ... gave me a sensation of being exempt from the normal laws of chance."

Adams: "Reality is overrated. ... What you do know for sure is that some ways of looking at the world work better than others."

Adams: "Strip out the unnecessary noise from a situation until all that is left is the absurd-yet-true core."

Adams: "I like crackpot ideas because I find them inherently interesting, and often they inspire ideas that have merit. I also like coming up with my own crackpot ideas, sometimes several per day."

Adams: "Choosing among attractive alternatives can ... be exhausting. You want to feel as if you researched and considered all of your options. That's why I find great comfort in routine."

Adams: "People don't realize how hard [running with things on the fly] is."
[Joe Rogan: "It's not that hard, honestly. It's not coal mining."]
Adams: "Well, you have to have the right kind of mind."

Adams: "I noticed in [Donald Trump] the skills that I've developed over decades for persuasion but at a higher level than I've ever seen. He's the most persuasive living human that I've ever experienced. And I mean that in terms of actual technique. He's full of technique and it's all the time."

New York Times: "While Dilbert's creator is best known for skewering management miscues on a daily basis, it quickly becomes clear ... that Mr. Adams also has more than a few ideas about how businesses can be run well."

Bloomberg Magazine: "[His girlfriend] recently persuaded Adams to take a trip to London and Zurich - the first time he'd ever traveled beyond Canada and Mexico. 'I don't like being uncomfortable,' he said, 'and travel is uncomfortable.' He prefers to stay home, keeping busy with various entrepreneurial projects."