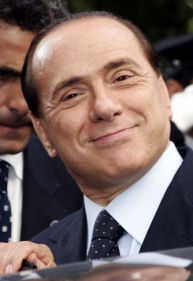 Quotes by and about Silvio Berlusconi

Berlusconi: "Political bureaucracy is a machinery that is perfect for blocking, banning, delaying, and impeding progress."

Paul Ginsborg: "Berlusconi's conception of democracy entails a lot of elections where voters can vote for each officeholder directly. Berlusconi's idea of democracy is a battle of large personalities." 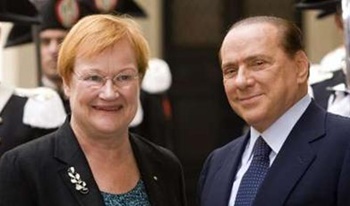 [When asked to explain how Italy managed to get the support of its biggest competitor, Finland, in a EU Food Authority dispute:]
Berlusconi: "I used all my playboy skills and courted the [female] Finnish President."

Fedele Confalonieri: "In business, Berlusconi would keep expenditures down by using his network of relations to the maximum: He would find anyone who stood to gain from the coming venture and then form an alliance with them."

Paul Ginsborg: "One of Berlusconi's housing projects, a gated community by the name of MILANO 2, was marketed as 'a city for winners.'"

Paul Ginsborg: "The construction team would fear Berlusconi's visits to [his] construction sites and also stand in awe of his keen sense of details and particulars."

Paul Ginsborg: "At the ambitious boarding school his parents sent him to, Berlusconi often got good grades, although never for good behavior."

Marcello Dell'Untri: "He can forgive deceit, but not stupidity."