Quotes by and about Steve Ballmer

Ballmer: "[When starting a company you have to have] a lot of patience. I think a lot of entrepreneurs think that things happen quickly. Success is ... a great idea [and] a lot of hard work. Certainly that was the history of Microsoft in the early days. ... [It's] just a lot of hard work to get from here to there."

Ballmer: "You have to [have controls] in place to ensure the job is being done responsibly."

Ballmer: "The key isn't to quibble with style that somebody uses or the approach. The key is to grade the results." 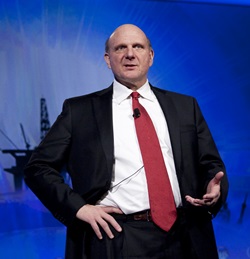 Ballmer: "[Microsoft] was all programmers when I joined the company in 1980. I came in to be a business person."

Ballmer: "I can honestly say I think I'm the only person who can say they've either been the number one or number two guy in companies from all sizes between 24 and 75,000. I don't think you can find anybody else who would tell you that they've basically run companies of all those sizes."

[Asked about his abrasive style where he shouted down employees:]
Ballmer: "[These days] I do that much less frequently [but] if you put me [on a job where] I'm supposed to figure out the answer, I'm as likely to be as much bull in the china shop as I ever was. It's not personal, I don't intend to hurt anybody. I just don't think I'm getting through to people [and then] I get frustrated."

Ballmer: "Leaders really do need to hit the exact right balance on what I'd call the optimism realism curve. If you're not realistic, you lose respect from customers, partners, shareholders, press, employees, if you're not realistic. But if a leader can't be optimistic, if a leader can't say, life is going to be better, we're going to take share, we're going to improve this situation, if you can't sort of handle being optimistic and realistic at the same time, I think it [will be hard for you] to be a great leader." 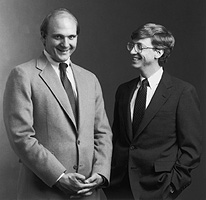 Peter Sandel: "You do not mess with Ballmer. He's an ass-kicking enforcer. He's as tough as they come."

Janet Lowe: "Ballmer ... bangs on the walls and shouts to make a point."

New York Times: "[He] is a freak for numbers. He doesn't just think about financials. He has memorized virtually every sales number for every one of his divisions, quarter by quarter, for years. This is a man who has favorite spreadsheet cells."