Quotes by and about Thomas Edison

Edison: "What a wonderfully small idea mankind has of the Almighty. My impression is that he has made unchangeable laws to govern this and billions of other worlds and that he has forgotten even the existence of this little mote of ours ages ago. Why can't man follow up and practice the teachings of his own conscience, mind his business, and not obtrude his purposely created finite mind in affairs that will be attended to without any volunteered advice."

Edison: "Satan is the scarecrow in the religious cornfield."

[Asked about his command of many subjects:]
Edison: "It is part gift and part cultivation. It is wonderful how one can accustom one's self to absorbing facts when necessary. Most people could do it if they wished." 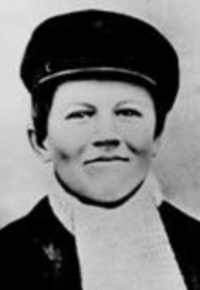 Edison [diary entry:] "Towards sundown [I] went with the ladies on [the] yacht. Talked about love, Cupid, Apollo, Adonis, ideal persons. One of the ladies said she had never come across her ideal. I suggested she wait until the second Advent."

Edison [diary entry:] "[My daughter] just read to me outlines of her proposed novel. The basis seems to be a marriage under duress. I told her that in case of a marriage to put in bucketfuls of misery. This would make it realistic."

Edison [diary entry:] "[Today we went fishing.] Fish seem to be rather conservative around this bay; one seldom catches enough. ... Dante left out one of the torments of Hades - I could imagine a doomed mortal made to untangle wet fish lines forever. Everybody lost patience at the stupidity of the fish in not coming forward promptly to be murdered. We hauled up anchor, and ... made for the vicinity of Apple Island. While approaching it we saw a race between two little model vessels full rigged and about 2 feet long. Two yawl boats filled apparently with US naval officers and men were following them. Are these effeminate pursuits a precursor of the decline and fall of a country as history tells us?" 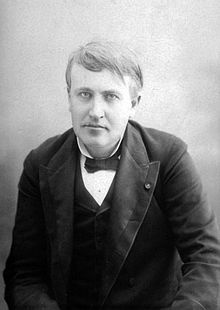 Francis Arthur Jones: "He has just the requisite amount of imagination to make him conceive great things, yet not enough to make him a dreamer. He is astonishingly practical in all his ideas. ... Edison himself has no use for a dreamer, and none has ever found a footing in his laboratory. All must be 'hustlers,' though they may never hope to 'hustle' as Edison does." 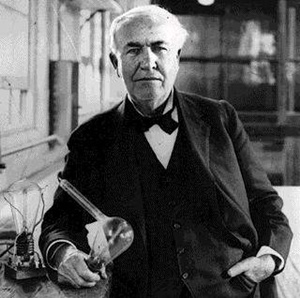 Francis Arthur Jones: "Edison never forgets a face. He will regard a man newly introduced with great keenness, and after that his features apparently are indelibly impressed upon his brain. At a recent dinner given in Edison's honor, the most striking thing in connection with it was the number of men who renewed their acquaintance with the inventor and found that he had not forgotten them."

Matthew Inman: "Edison is a good example of a non-geek who operated in a geek space."

Reese Jenkins: "He loved to pull pranks and practical jokes."

Reese Jenkins: "Even as a child, Edison was venturesome in business. He grew vegetables on his father's farm and sold them in town. At age 12, Edison began to sell newspapers, candy, and sandwiches on passenger trains between Port Huron and Detroit. Later, he hired others to work for him selling goods on the train and at stops. When he was 15, he published and sold a newspaper called the Weekly Herald."