The WW2 Generals Test is an experimental measure that tries to match you with one of six World War 2 generals by using a composite model of your tactical attitudes and personality traits. On this basis, the test will determine which of the six generals you most closely resemble.

Which World War 2 general would you be? For each of the following statements, indicate your level of agreement below.

I do most things in my life by the book.

The IDRlabs Second World War Generals Test (IDR-SWWGT©) was developed by, and is the exclusive property of, IDRlabs International. The IDR-SWWGT is not associated with any specific researchers in the field of psychology or any associated research institutions.

The IDRlabs Second World War Generals Test has been developed by professionals who work with psychological instruments and personality assessments, using historical research regarding the wartime strategies and general personality traits of six prominent WWII generals. The present test utilizes genuine psychometric items to ascertain a test-taker's closest WWII general match based on aspects of their own personality.

Online tests such as this one, whether they are professional, academic, or for entertainment purposes only, are primarily first looks at some component of your personality or character. Regarding the present test specifically, your test scores and personalized results will provide information as to your closest personality match with one of six generals from the Second World War (Montgomery, Manstein, Patton, Rommel, Eisenhower, and Zhukov.) Despite this test's being based on academic and historical research on WWII and the strategies of its most prominent generals, no instrument ever devised can match your personality with total accuracy or reliability. In addition, no psychological measurement can replace familiarizing yourself with the relevant personality theories. For more information regarding the above WWII generals, you can consult academic and historical resources that are readily available online.

The test provides feedback such as the following: George Patton – Patton favored strategies that were aggressive, fast-paced, and offensive. An energetic hands-on commander, he was a man of action who preferred to act immediately rather than risk letting an opportunity slip by. Impetuous on the battlefield and driven to win, Patton eschewed static defenses as “monuments to man’s stupidity” and strove for constant forward momentum in the operations he commanded. A man’s man and a soldier’s general, Patton was able to inspire, persuade, and motivate troops with his enthusiastic (and often profane) speeches, succeeding in eliciting marches and attacks from his men that others thought impossible. Patton’s preference for attack meant that he could become impatient with those who were not willing to seize every opportunity to smash open enemy lines, stating that they would have time to rest when the war was over.

As the creators and publishers of this Second World War Generals Test, we have endeavored to make the test as accurate and valid as possible by subjecting it to statistical controls and validation. Before taking our free online test, please keep in mind that the test is provided to you “as-is” and must therefore not be interpreted as the equivalent of professional advice or recommendations. For additional information regarding the current test or any of our other online tests, please refer to our Terms of Service. 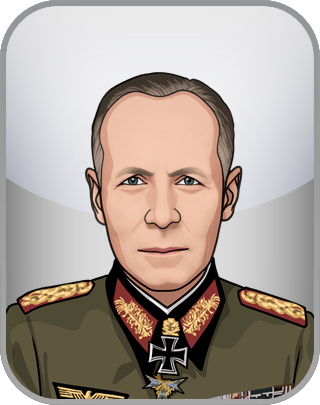 1. Free. This Second World War Generals Test is available to you at no charge and will allow you to obtain your scores as related to the personality profiles of six prominent wartime generals.

2. Unique. Though online tests and quizzes matching your personality to fictitious characters or pop culture icons are readily available, there are few tests that match one’s personality to real-world, historical WW2 generals.

3. Statistical controls. Results for the current test are entered into an anonymized database. Statistical analysis of the quiz is conducted to ensure maximum validity and accuracy of the test scores.

4. Made by professionals. The present test has been made with contributions from individuals who work professionally with psychological research and psychometrics.