Raja Burrows is a contributing guest writer for CelebrityTypes. As with other guest writers on the site (such as Malin Gustavsson, Michael Pierce, and Jesse Gerroir), the views expressed in this article are not necessarily completely overlapping with our own.

First things first: There is no magic formula for finding the perfect mate. There are a million factors that go into whether two people are compatible or not that have nothing to do with personality type. Additionally, applying an overly simplistic view of typology to your dating life 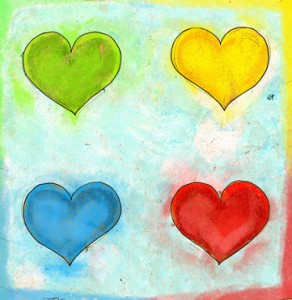 (“We’re exactly alike in almost every way because I’m an INFJ and she’s an INFP!”) is unlikely to yield the results you want. But a thorough understanding of function order – and, more importantly, the function axes – can provide important insights into many key factors of any successful long-term relationship.

The Judging Axis: Fe-Ti vs. Fi-Te

The best place to begin when talking about relationships is how we experience sentiments. Regardless of our four-letter type, we all have a Feeling function somewhere in our function order; FJ and TP types have Extroverted Feeling (Fe) while TJ and FP types have Introverted Feeling (Fi). All other things being equal, two types with the same Feeling orientation are going to have an easier time communicating than two types with the opposite. In other words, an ENTP is probably going to find it easier to get on the same page, Feeling-wise, with an ESTP or ISFJ, as opposed to an ESTJ or ISFP. The reason is that an Fe user experiences and judges sentiment on the basis of external parameters; as “belonging to the group.” Fe is willing to downplay the individual’s own sentiments in deference to the sentiments of the other people involved. An Fi user, on the other hand, experiences his personal sentiments in a much more subjective, individualized way. An Fi user is therefore likely to feel very uncomfortable with such “insincerity.” Fi will fight tooth and nail to maintain its individuality and expression thereof. An Fi user’s sentiments, then, are very much “her own” and aren’t seeking to align themselves with outside conditions in the way an Fe user’s are.

Because Fi users also have Te, they will tend to be more pragmatic in their thinking. To a Te user, there is an optimal, objective conclusion that can be reached in any given situation in which objective facts matter more than interpersonal considerations. Unlike Ti, Te is not terribly beholden to internal logical principles and is instead eager to refine its conclusions based on whatever objective information presents itself. Te is hierarchical in its reasoning and looks for the “best” solution to any given problem, whereas Ti is much less confrontational and prefers to look for abstract solutions that are less “objective” and more of interest to the Ti user’s personal psyche. As a result, when a major decision is on the line in a relationship, Fi-Te users and Fe-Ti users will take fundamentally different tacks, even if they end up arriving at the same conclusion. While most of the decisions made in relationships are relatively trivial (such as whether or not to order takeout for the third night in a row), there will inevitably come a time when the conversation turns to weightier topics, such as “would you be willing to relocate across the country with me for my new job?” or “do we want to raise our kids in Manhattan or in a suburb farther upstate?” Not that these conversations are ever easy, but there’s bound to be less friction when both parties are more or less speaking the same logical and emotional languages.

While type alone cannot make or break a relationship, there are a few type pairings that require exceptional time and effort on the part of both people to find common ground: ESFJ-ENTJ, ENFJ-ESTJ, ISFP-INTP, and INFP-ISTP. Each of these type pairings feature a dominant Feeling type and a dominant Thinking type with no cognitive functions in common. In each pairing, the Feeling types experience sentiment in the exact opposite way the Thinking types do, which does little to encourage the Thinking type to give herself permission to access the function and side of herself she tends to repress. Add to that the fact that they will rarely perceive any given situation the same way because of their opposing N-S axis and you have two people with several significant cognitive hurdles to overcome on a regular basis. This is not to say they can’t or shouldn’t try and make it work if there’s a real connection between them, but it behooves everyone involved to have a realistic understanding of the additional challenges those type pairings pose.

Also important to the orientation of the Feeling function is the axis responsible for Sensation and Intuition. In my experience, the big differences between Fe-Ti and Fi-Te show up in a relationship about 20% of the time, when the stakes are at their highest. The important conversations like those mentioned above require both people to be deeply in tune with their own Feeling-Thinking axis as well as that of their partner. But despite what “Doctor Who” may have us believe, being in a relationship (romantic or otherwise) is more than just an endless series of life or death decisions. Most of the time, you’re going to be debating things like “what should we dress up our two-year-old as for Halloween this year, a giraffe or baby velociraptor?” These are relatively mundane choices that you really don’t want to be spending any more time on than you have to. Actually enjoying the thing you collectively decided on doing is a much better use of your energy than debating it to death.

All the Single Ladies (and Gentlemen)!

If you happen to not be in a long-term relationship, whether by choice or by circumstance, there are many ways to use typology to maximize your dating life. The first step, of course, is to have a solid grasp on your own four-letter type. In particular, you must be excruciatingly honest with yourself in terms of how your dominant and inferior functions manifest themselves in unhealthy, ego-preserving ways. The more aware you are of your own idiosyncrasies, the more likely you are to recognize when your behavior is en route to a destructive path and to head it off before it actually gets there. While no two individuals wrestle with their egos in exactly the same way, here are some common ways that each type contends with relationship fears as a result of their repressed inferior function:

Whether you’re single or in a relationship, the key to effectively using personality type to improve your love life is first understanding your own preferences and how they manifest themselves as both strengths and weaknesses. There’s so much more to this than simply looking at a given type’s four-letter code and contrasting them with your own. A mastery of the eight cognitive functions is critical for understanding human dynamics through the lens of Jungian typology. And ultimately, the study of personality type is the study of people. When used as a tool to better appreciate your partner, it can enrich and strengthen your relationship in countless ways.