Leading social scientists like Niall Ferguson and Francis Fukuyama once declared non-liberal ideologies dead. But recently, newer writers such as David Goodhart and Patrick Deneen have started talking of a postliberal future.

Is liberalism breaking down, and if so, where do you stand in the coming clash of ideologies? For each of the following statements, indicate your level of agreement below.

The state has no business dictating a minimum wage.

The IDRlabs Ideologies Test is the property of IDRlabs. It is directly inspired by the writings of political philosophers with input from all sides of the political spectrum. The test does not seek to measure everyday politics but ideological allegiances. The test measures the ideologies such as the ones described below.

Right-Liberalism: Whereas Left-Liberalism seeks a combination of individual rights and favors economic redistribution as the way for the individual to be able to exercise these rights, Right-Liberalism (or Classical Liberalism) is solely concerned with the autonomy and rights of the individual. Right-Liberals typically do not agree that economic redistribution is necessary but seek to minimize it. Taxing people (i.e., confiscating their money by force) can be seen as an impingement on their right to self-determination. Consequently, many Right-Liberals argue that if we are to confiscate people’s money through taxation, the money must be spent on essentials such as police, the courts, and the military. Whereas modern states, in their eyes, tend to spend money carelessly and on non-essentials.

Progressivism: Is the belief that it is possible to improve humanity and human societies through radical political action. Progressivism is often associated with socialism, but in recent years, the economic agenda has taken a backseat to issues pertaining to values and the social order. Rather than reorganizing the economy along socialist lines, contemporary progressives more often champion issues such as social justice, social programs, collective goals, and radical rectifications of society (such as eliminating racism, sexism, and other forms of differential treatment) through fundamental upheavals of the traditional social order. Except for some members of the Hard Right, people of other ideological strands usually also wish to fight racism, sexism, and the like. However, they disagree with the wide-ranging definitions of what constitutes racism and sexism that progressives use. They also do not often agree with how progressives wish to fight these injustices.

As the publishers of these Ideologies, gauging your ideological and political allegiances, we have striven to make the test as reliable and valid as possible by subjecting it to statistical controls and validation. However, free online quizzes such as the present Ideologies Test do not provide professional assessments or recommendations of any kind; the test is provided entirely "as-is." For more information about our online tests and quizzes, please consult our Terms of Service. 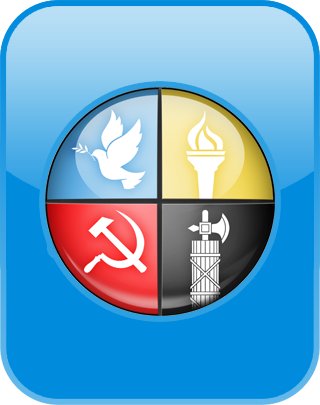 1. Free. This Ideologies Test is delivered to you without needing payments, signups, or registration. It measures the ideologies of Left-Liberalism, Right-Liberalism, Progressivism, and the Hard Right.