The philosopher personality test measures which of seven venerable philosophers you resemble the most.

Which philosopher are you like? For each of the following questions, indicate how well it describes you below.

Generally speaking, only the highest specimens of humanity interest me.

The test features the following philosophers:

Nietzsche: Nietzsche was a German philosopher and a cultural critic. Regarding his biography, he expressed contempt and disgust for the behavior of most and mocked them incessantly. Nietzsche believed that all philosophy is autobiographical and that our so-called “principles” are really influenced by our self-interest and our physical and sensory experiences. Furthermore, he advised that we should not live an overly cautious, orderly life, risking nothing, since the outcomes that may result from taking chances may lead to personal growth. Additionally, Nietzsche argued that objective truth is impossible—there can only be perspectives and interpretations driven by a person's interests and experiences. For Nietzsche, it was important for each individual to find the meaning in his or her own life and live in accordance with that meaning.

Kant: A great scientist and a great philosopher, Kant aimed to fuse the writings of Newton with the philosophy of his day. For Kant, the human mind contains the faculties that appear to us to be woven into the physical universe (such as quantity, causality, totality existence, etc.). These faculties interact with reality as it exists in itself, creating a synthesis that appears to us as “objectively true” while being, in fact, only true according to the synthesis between the rational categories of the human mind and the raw “stuff” of reality which is unknowable to us in its unsynthesized form. Kant was also a notable thinker in the domain of ethics, where he developed the rules-based approach to ethics and summed up his teaching in the categorical imperative: An action can only be ethical if it can be followed as a general principle by all members of society, in all similar situations.

Plato: Plato proposed that the only true knowledge involves rational thought, which is ultimately sublimated into intuitive and mystical knowledge of the good. According to Plato, at the end of this journey lies an enlightenment experience, where the soul grasps the metaphysical source of the universe all at once, dispelling all ignorance and attaining immortal wisdom. Since the soul is immortal and has been born many times over before its present life, it has already seen many things, both in this world and in the worlds beyond this one. On the other hand, Plato posited that not everyone is capable of mounting this ladder of knowledge to mystical transcendence. They have appetites that make them more fit to be workers and slaves, while those who are dominated by honor and courage are more fit to be soldiers and police.

Aristotle: Aristotle was, above all, motivated by the desire to know, a quest he accomplished by gathering data on everything from animals and plants to political constitutions and theatre plays. With an engineer-like or scientist’s mind, Aristotle quickly saw the patterns in the data, grouping everything by commonalities, properties, and overall structure. Using unsentimental rationality, Aristotle also applied these principles to humans, classifying them by temperament, gender, race, and various other properties with a level-headed shrewdness that caused his observations to be read and celebrated throughout the ages. As for happiness, Aristotle believed that it is best attained by doing what comes naturally to us and doing it well; in other words, to fulfill one’s purpose and become a paragon of human excellence.

Hume: Hume was skeptical of most beliefs – be they religious or derived from pure rationality without experimental data to back them up. Consequently, friction with the settled orthodoxies of his time was a constant theme in his life. Like the other empiricists that preceded him, Hume believed that the contents of the mind came only from experience. Hume is known for the is-ought divide, also called Hume’s Fork: The proposition that it is not possible to derive an “is” from an “ought” (e.g., we cannot go from the moral proposition that everyone ought to be equally smart to the factual proposition that everyone is equally smart). Hume also proposed tremendous challenges to concepts like causation and induction – challenges that some consider having never been solved to this day.

Epicurus: Epicurus advised his followers to live simple lives. For example, their food and drink consisted mainly of bread and water, with cheese as a rare indulgence. Having been much misunderstood by posterity, Epicurus actually counseled that intense pleasures were to be avoided because they were often followed by pain – either from overindulgence or from losing access to the pleasures again. Likewise, Epicurus held that stronger and more uncommon pleasures would, at the same time, make common and less potent pleasures less pleasant, thereby robbing the man who indulges in the rarefied pleasures of the opportunity to enjoy a simple, quiet life.

Diogenes: Diogenes chose to become homeless and settled in a big earthenware storage jar on the sidewalk. He stayed in his street-dwelling, where he shocked the Athenian citizenry through seemingly mad and crass behaviors, backed up by insults and occasional wise sayings. One could say that Diogenes was history’s first punk, a true provocateur who cared little for his own well-being or physical safety, mocking both the highborn Plato and the mighty conqueror and king Alexander in a remorseless display of how conceited they looked when viewed through the lens of his jarring, no-holds-barred philosophy and view of life. Diogenes furthermore disapproved of conventional religion and believed social customs are human inventions and that adhering to them leads to hypocrisy.

As the publishers of this philosopher personality test, which allows you to screen yourself for the signs of this trait, we have strived to make the test as reliable and valid as possible by subjecting this test to statistical controls and validation. However, free online quizzes such as the present philosophy personality test do not provide professional assessments or recommendations of any kind; the test is provided entirely “as-is.” For more information about any of our online tests and quizzes, please consult our Terms of Service. 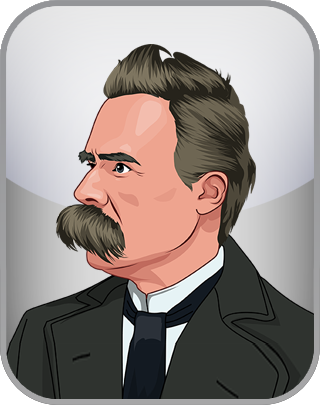 1. Free. This philosophy personality test is delivered to you free of charge and will allow you to obtain your scores related to the characteristics of Nietzsche, Kant, Plato, Diogenes, Aristotle, Hume, and Epicurus.