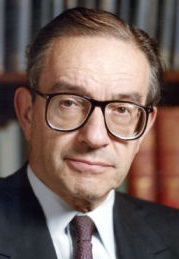 Quotes by and about Alan Greenspan

Greenspan: "I've always considered myself more of a mathematician than a psychologist."

Greenspan: "[Janet Yellen] and I don't agree on lots of things and never have, but I enjoy talking to her because she has arguments and logic behind it."

Greenspan: "[Ayn Rand] caught me in contradictions, which shook me, and I said, 'My God, she is right.'"

Financial Times: "Greenspan ... believed in analysis based mainly on hard science and empirical facts. Rand told him that unless he considered human nature and its irrational side, he would 'miss a very large part of how human beings behaved.'"

On the Financial Crisis

Greenspan: "What went wrong? Why was virtually every economist and policymaker of note so blind to the coming calamity? How did so many experts, including me, fail to see it approaching? I have come to see that an important part of the answers to those questions is a very old idea: 'animal spirits,' the term Keynes famously coined in 1936 to refer to 'a spontaneous urge to action rather than inaction.' Keynes was talking about an impulse that compels economic activity, but economists now use the term 'animal spirits' to also refer to fears that stifle action. Keynes ... [noted] the importance of irrational factors in economic decision-making. ... The trouble is that such behavior is hard to measure and stubbornly resistant to any systematic analysis. For decades, most economists, including me, had concluded that irrational factors could not fit into any reliable method of forecasting."

Greenspan: "Before [the financial crisis] I was embarrassed by the adulation [which I received] - they made me a rock star. But I knew then that I was being praised for something I didn't really do. So after, when I got hammered, it kind of balanced out, since I don't think I deserved the criticism either. ... I am a human so I feel it but not as much as some."

Financial Times: "[During our interview he reveals] a mind that – to his credit – remains profoundly curious. ... When I say to him that I greatly admire his spirit of inquiry - even though I disagree with some conclusions - he immediately peppers me with questions. 'Tell me what you disagree with – please. I really want to hear,' he insists, with a smile that creases his craggy face."

Financial Times: "As someone who never had children, his books now appear to be his real babies."

New York Times: "Greenspan confesses in [his autobiography] that learning to write in the first person was a struggle."