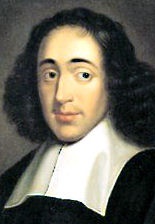 Quotes by and about Baruch Spinoza

Spinoza: "Peace is not an absence of war, it is ... a state of mind, a disposition for benevolence."

Spinoza: "He, who endeavors to lead men by reason, does not act by impulse but courteously and kindly, and his intention is always consistent."

Spinoza: "I submit that the world would be much happier, if men were as fully able to keep silence as they are to speak. Men can govern anything [except] their tongue."

Spinoza: "Hatred is increased by being reciprocated, and can on the other hand be destroyed by love. ... He who conceives ... that the object of hate loves him [will] banish the hatred from his mind. ... Therefore he who lives under the guidance of reason will endeavor to repay hatred with love, that is, with kindness."

Spinoza: "All ... causes of hatred depend solely on differences [in the affectations of men]. ... [Where there is] agreement between men's natures [there is no hatred]."

Spinoza: "He who rightly realizes, that all things follow from the necessity of the divine nature, and come to pass in accordance with the eternal laws and rules of nature, will not find anything worthy of hatred, derision, or contempt, nor will he bestow pity on anything, but to the utmost extent of human virtue he will endeavor to do well, as the saying is, and to rejoice."

Spinoza: "He, who is easily touched with compassion, and is moved by another's sorrow or tears, often does something which he afterwards regrets; partly because we can never be sure that an action caused by emotion is good, partly because we are easily deceived by false tears. I am in this place expressly speaking of a man living under the guidance of reason. He who is moved to help others neither by reason nor by compassion, is rightly styled inhuman, for he seems unlike a man."

Spinoza: "The good, which a man desires for himself and loves, he will love more constantly, if he sees that others love it also. [Therefore] he will endeavor ... to bring about that all should rejoice therein."

Spinoza: "Men are moved by opinion more readily than by true reason. ... The true knowledge of good and evil stirs up conflicts in the soul, and often yields to every kind of passion."

Spinoza: "Men who are governed by reason - that is, who seek what is useful to them in accordance with reason - desire for themselves nothing, which they do not also desire for the rest of mankind, and, consequently, are just, faithful, and honourable in their conduct."

Spinoza: "It follows ... from the very nature of reason, that man’s highest good is common to all, inasmuch as it is deduced from the very essence of man, in so far as defined by reason; and that a man could neither be, nor be conceived without the power of taking pleasure in this highest good. For it belongs to the essence of the human mind, to have an adequate knowledge of the eternal and infinite essence of God."

Spinoza: "There can be no hope without fear, and no fear without hope. ... [The same applies to] love and hatred."

Spinoza: "Everyone endeavors ... to cause others to love what he himself loves, and to hate what he himself hates: as the poet says: 'As lovers let us share every hope and every fear: ironhearted were he who should love what the other leaves.'"

Henry Oldenburg [to Spinoza:] "Solid learning, conjoined with courtesy and refinement of manners (wherewith both nature and art have most amply endowed you), carries with it such charms as to command the love of every honourable and liberally-educated man."

Nietzsche: "I am utterly amazed, utterly enchanted! I have a precursor, and what a precursor! I hardly knew Spinoza."