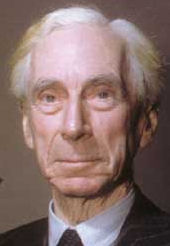 Quotes by and about Bertrand Russell

Russell: "No man is likely to have arrived at complete and final truth on any subject whatever."

Russell: "Hitler is an outcome of Rousseau."

Albert Einstein: "Hume has permanently influenced the development of the best of philosophers who came after him. One senses him in the reading of Russell's philosophical analyses, whose acumen and simplicity of expression have often reminded me of Hume."

A.C. Grayling: "He dedicated himself to political and social causes, not with the intention of telling people what or how to think, but to add something of value to the public conversation."

Russell: "There is one, and only one, important foreign element in the traditional civilization of China, and that is Buddhism. Buddhism came to China from India in the early centuries of the Christian era, and acquired a definite place in the religion of the country. We, with the intolerant outlook which we have taken over from the Jews, imagine that if a man adopts one religion he cannot adopt another. The dogmas of Christianity and Mohammedanism, in their orthodox forms, are so framed that no man can accept both. But in China this incompatibility does not exist; a man may be both a Buddhist and a Confucian, because nothing in either is incompatible with the other. In Japan, similarly, most people are both Buddhists and Shintoists. Nevertheless there is a temperamental difference between Buddhism and Confucianism, which will cause any individual to lay stress on one or other even if he accepts both. Buddhism is a religion in the sense in which we understand the word. It has mystic doctrines and a way of salvation and a future life. It has a message to the world intended to cure the despair which it regards as natural to those who have no religious faith. It assumes an instinctive pessimism only to be cured by some gospel. Confucianism has nothing of all this. It assumes people fundamentally at peace with the world, wanting only instruction as to how to live, not encouragement to live at all. And its ethical instruction is not based upon any metaphysical or religious dogma; it is purely mundane. The result of the co-existence of these two religions in China has been that the more religious and contemplative natures turned to Buddhism, while the active administrative type was content with Confucianism, which was always the official teaching, in which candidates for the civil service were examined." - 'Chinese and Western Civilization Contrasted'

Russell: "Among present day religions Buddhism is best. The doctrines of Buddhism are profound, they are almost reasonable, and historically they have been the least harmful and the least cruel. But I cannot say Buddhism is positively good, nor would I wish to have it spread all over the world and believed by everyone as crudely as the Mohammedans do their religion of Islam. This is because Buddhism only focuses on the question of what Man is, not on what the universe is like. Buddhism does not really purpose the truth; it appeals to sentiment and, ultimately, tries to persuade people to believe its doctrines which are based on subjective assumptions not objective evidence." - 'The Essence and Effect of Religion'

Russell: "[With Jesus] there is the curious story of the fig-tree, which always rather puzzled me. You remember what happened about the fig-tree. 'He was hungry; and seeing a fig-tree afar off having leaves, He came if haply He might find anything thereon; and when He came to it He found nothing but leaves, for the time of figs was not yet. And Jesus answered and said unto it: 'No man eat fruit of thee hereafter for ever', and Peter saith unto Him: 'Master, behold the figtree which thou cursedst is withered away.'' This is a very curious story, because it was not the right time of year for figs, and you really could not blame the tree. I cannot myself feel that either in the matter of wisdom or in the matter of virtue Christ stands quite as high as some other people known to history. I think I should put Buddha and Socrates above Him in those respects." - 'Why I Am Not a Christian'

Russell: "But has Christianity, in fact, stood for a better morality than that of its rivals and opponents? I do not see how any honest student of history can maintain that this is the case. Christianity has been distinguished from other religions by its greater readiness for persecution. Buddhism has never been a persecuting religion." - 'Can Religion Cure Our Troubles?'