Quotes by and about Bill Clinton

Clinton: "My speechwriters must have been tearing their hair out, because as we practiced [my inaugural speech] between one and four in the morning on Inauguration Day, I was still changing it."

Clinton: "I judge my presidency primarily in terms of its impact on people's lives. That is how I kept score: all the millions of people with new jobs ... the kids with health insurance and after-school programs ... the families helped by the family leave law. ... All those people have stories, and they're better ones now."

Eric Yosomono: "As president, Clinton lost the launch codes for the U.S. nuclear arsenal. Clinton and his staff realized what a huge deal this was, and lied [to the military] about having lost them."

Steven J. Rubenzer: "One of the mysteries of Clinton's personality has been his continued penchant for getting into trouble. ... Few people doubt that Clinton is a very bright man, yet he behaves much like someone who does not think ahead or appreciate the consequences of his actions." 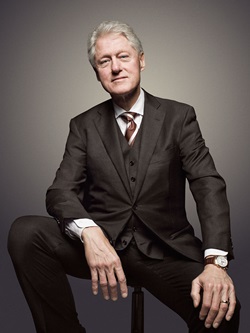 Steven J. Rubenzer: "He enjoyed talking to people a great deal, did not avoid crowds, and could speak well in public without preparation."

Steven J. Rubenzer: "[He was] a Rhodes scholar with down-to-earth tastes, who once identified himself as a 'Bubba' on a radio program."

Ernie Dumas: "Hillary was the mastermind of [his first] comeback. Most of his people advised him at the time, 'Don't run again, wait two years.' Hillary says, 'You can come back and you can do it again.' He didn't trust himself as much as he trusted her."

Clinton [in his presidential farewell speech:] "I've had a wonderful time. It's been an honor to serve and fun to laugh. I only wish that we'd even laughed more these last eight years because power's not the most important thing in life and only counts for what you use it."

Harry Thomason: "This guy loved being President. He even loved being President when it was tough. A lot of times I would say, 'How does he smile? How does he keep laughing? How does he keep going through this?' But it was because he got the energy back from the people. Whatever you think of the man, he wanted to do the right thing for the people of his county, his state, his country, and that never changed about him." 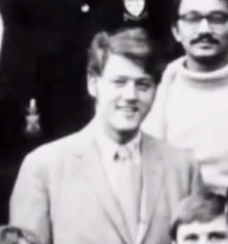 Steven J. Rubenzer: "[Bill Clinton and John F. Kennedy] share many traits. ... Each clearly had an appetite for thrills and excitement. They openly showed their feelings and were optimistic, cheerful, and outgoing and friendly."

Steven J. Rubenzer: "[Bill Clinton and George Washington] are nearly opposite in their ... personalities."

John M. Berecz: "Bill Clinton is always faithful: faithful to himself and the moment."

Steven J. Rubenzer: "Clinton was much more prone to value openmindedness over devotions to principles and ideals."

Steven J. Rubenzer: "Clinton would much rather spend time at a crowded beach than an isolated cabin in the woods. ... He had personal magnetism and was known as warm and friendly."

George W. Bush: "[Clinton] will look you in the eye, he'll shake your hand, he'll hold your baby, he'll pet your dog - all at the same time."